There have been digital currencies like BitGold and digital payment systems like Paypal before. What makes cryptocurrencies so special? In fact, they aren’t really special except for two things. First, literally anyone can use them without needing a photo ID or a bank account. If you can carry a paper wallet in your pocket or copy-and-paste a string of letters and numbers, you can use cryptocurrencies. You could think of them as a relatively anonymous or pseudonymous form of digital cash, if you like. 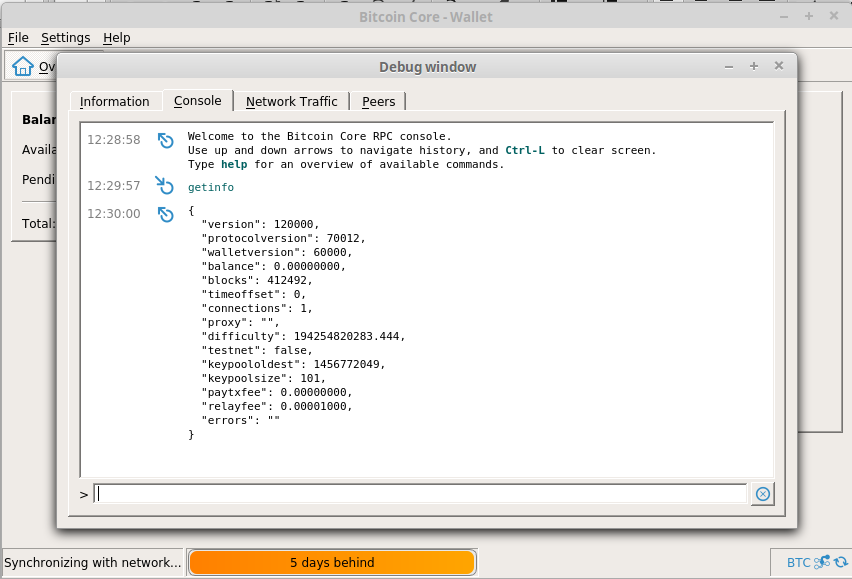 The output for the “getinfo” command in Bitcoin. Note the very high difficulty level.

Due to the inefficient nature of most cryptographic algorithms, providing the processing power needed to secure a cryptocurrency requires specialized hardware called mining rigs. The process of solving the cryptographic function is referred to as mining in the cryptocurrency community. It’s usually not recommended to mine Bitcoin on a laptop or tablet. The SHA-256 algorithm will chew its way through the processor without rewarding its owner with much. When cryptocurrency experts talk about difficulty levels, they’re talking about the chance that a processor designed for the job will solve the hash first. The higher the difficulty level, the lower the chance that a normal processor used for computer-based consumer products will solve the algorithm quickly enough.

When a new user downloads a Bitcoin wallet, that user is downloading a client that connects to full nodes that store and relay data on the Bitcoin network. You could download a Bitcoin client right now without needing to verify your identity. Cryptocurrencies are designed to make use of a decentralized network. You don’t even need to verify your identity to earn Bitcoin when you can head over to Bitcointalk or one of the many Bitcoin freelancing sites to pick up some odd jobs for Bitcoin. (First, though, you may wish to establish yourself on Bitcointalk, maybe by asking any questions you have in the beginners’ forum. They tend to be more forgiving of people interested in earning Bitcoin if you’ve already made a few posts and know the basics.) If a user can connect to just one node on the Bitcoin network, that user can send and receive Bitcoin. The Bitcoin network doesn’t really care which node the user connects to as long as it’s a valid one.

This is one of the latest models of the Antminer. They’re a trifle expensive, but many Bitcoin devotees believe that it’s worth the investment.

Who can run a full node on the Bitcoin network? Who can mine Bitcoin? Actually, you could if you are willing to make the investment in the appropriate hardware. A full node on the Bitcoin network could be hosted on a good server and mining rigs are readily available on eBay. For this reason, Bitcoin does not rely on any particular third party and does not have any single point of failure that could bring down the entire system if it fails.

This low barrier to entry could make cryptocurrencies attractive to colonies that are ready to join interplanetary trade routes and willing to make a modest initial investment. When cryptocurrencies catch on in this manner, colonists will never need to beg an uncaring banker for permission to engage in economic activity. They don’t need to prove that they exist. They will only need to establish that they are capable of operating a client by scanning a QR code or copy-and-pasting a randomized string of numbers and letters and tapping a few buttons on a touchscreen. With a little planning and coordination between colonies that wish to participate in trade, colonists will never face the plight of the 2 billion humans on Earth who cannot engage in the same economic activities that you probably take for granted because they cannot open a bank account.

Cryptocurrencies are set up to not care about whether you have a photo ID card or if they prefer to avoid paying 2% or 3% in fees every time they make a transaction. Future colonists won’t even need to use one of the exchanges to get started. They just need to download the appropriate software and maybe hire an expert who can help them customize it for their needs and get set up.