So you’re walking around with your laptop or that nifty new tablet you got last week. You’re looking for a good Wi-Fi hotspot to connect with. Have you ever wondered how your portable devices recognize that there’s a wireless network in the area? Well, it’s a pretty complicated topic, so I’ll try to break it down and start off with a rundown of Analog and Digital transmissions.

Imagine standing in your yard with a garden hose. If you’re using it to put out a campfire or water your garden, you might move the hose up and down, creating a continuous series of waves. These waves will remain uninterrupted as long as the water stays on. These waves are a good analogy for or analog signals.

Analog signals are used for your telephone (to transmit your voice), dial-up Internet (in which computers need modems to translate the signals into a digital format), radios, and televisions. Analog signals are continuous, like the uninterrupted stream of water from the garden hose, and only frequency and wavelength distinguishes one wave from the next.

If you were to put your thumb over the end of the hose and then take it off (or if someone turned the hose off and turned it back on), the water would become discontinuous, or stop flowing and start again. Digital signals consist of data transmitted with a series of starts and stops. Morse code is an example of a digital signal, since it consists of a series of dots and dashes. When computers “talk” to each other, they use binary code over a digital signal.

Wireless networks rely on data traveling on radio waves. These waves are a part of the electromagnetic spectrum, like visible light or infrared (heat) waves, which requires no special medium for movement.

Visible light and heat waves do have their limitations. Light, for example, cannot penetrate objects like walls or ceilings and surrounding objects absorb heat waves. Radio waves do not have these limitations and can also travel long distances.

Wordnet’s definition of “Frequency” is “the number of occurrences within a given time period”. As it relates to radio frequencies, frequency refers to the number of times a wave completes its cycle within a given period of time, usually a second. This measurement is called hertz (Hz), or cycles per second. A Kilohertz is a thousand hertz, a megahertz is a million hertz, and so on. 1000 cycles per second would typically be written as 1 KHz, or one kilohertz.

Cycles are illustrated by an up-and-down wave called an oscillating signal or sine wave. The wave starts at zero, moves up to its maximum voltage, and then down to its minimum voltage. Then, it returns to zero, thus completing one cycle.

The frequency can be changed. Back to our garden hose analogy again. (Kind of unoriginal, I know, but it works.) The pressure on the water line would represent the electrical current’s voltage (V), which is measured in volts. The water flow can represent the current and is measured in amperes, also called amps. If you bought a hose with an increased diameter, you would reduce the resistance to the water flow, meaning the water can flow through the hose faster.

Resistance, also called impedance, is measured in ohms. German physicist George Ohm first proposed the formula for voltage, V=I*R, or voltage equals Current times Resistance. Electrical power is calculated by taking the voltage and multiplying it by the current, and is measured in watts.

Radio wave frequency is changed by changing the voltage or electrical pressure on a wire. When electricity passes through a wire, it creates a magnetic field around the wire and this field radiates radio waves. Radio transmissions use the radio waves as a carrier signal.

Amplitude Modulation, or AM, involves changes to the height of the carrier wave. An increase in height represents a 1 bit, while a decrease represents a 0 bit. The image demonstrates what this would look like on a sine chart. If you’ve ever tuned into an AM station on the radio, you’ll notice that you can pull the station from a greater range than FM, but it’s more vulnerable to electromagnetic interference from nearby power wires.

Frequency Modulation, or FM, changes the frequency of the waves. An increase in frequency represents a 1 bit, while a decrease represents a 0 bit. It can punch through the electromagnetic interference from nearby power sources, but tends to have a shorter range.

Phase Modulation, or PM, changes the starting point in a signal. These changes take place only when the binary bits being transmitted change from a 1 to a 0 and vice versa. 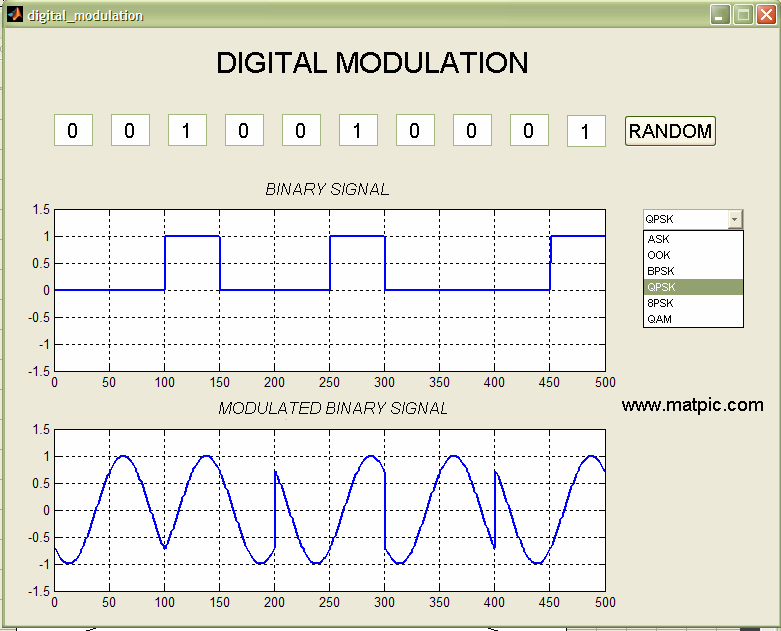 Most wireless systems use digital modulation. Advantages of this include better use of the bandwidth, less power used to transmit data, and better performance when there is interference.

Amplitude shift keying (ASK) is similar to AM analog, in that changes in the carrier’s height represent a 1 or 0 bit. Instead of both a 1 and 0 bit having a carrier signal, however, the 1 bit has a carrier signal while the 0 bit does not with ASK.

Phase shift keying (PSK) is similar to phase modulation. The difference is that the carrier signal starts and stops.

Because radio transmissions speed through the air rather than through a cable, they can be affected by their surroundings. Walls, doors, metal structures, and even the weather can have an effect on performance. As a result, the administrator of a wireless network will usually consider environmental factors when troubleshooting a network.

Gain is defined as the positive difference in amplitude between two signals. Amplification is often used synonymously with gain; however, gain is technically a measure of amplification. This can occur intentionally, by boosting the power supply to the signal, or unintentionally, when an RF signal bounces off objects like trees or walls and combines with the original signal to amplify it.

Loss, also called attenuation, is the negative difference in amplitude between to signals. Like gain, this can be intentional (somebody decreases the electrical signal) or unintentional (the signal gets absorbed by surrounding objects). Causes of loss can include, though is not limited to, reflection of the signal (metal objects can cause it to bounce back toward its source), scattering (rain can scatter a signal), or refraction (the signal hits cold damp air after moving through warmer, drier air).

Radio frequency power can be measured in milliwatts (mW) or decibels. A milliwatt is 1/1000 of a Watt and is used for linear scale measurements. Answers.com defines a linear scale as “A scale in which the divisions are uniformly spaced.” These scales generally start at zero; one example is a speedometer in a car. The loss or gain in radio frequency power can be measured by the number of milliwatts being transmitted. However, this does not necessarily reveal the relation to the whole.

To determine the gain or loss in radio frequency power in relation to the whole, most professionals in the field use decibels (dB) and use the 10’s and 3’s Rules of RF Math.

Measurement in decibels is relative.

In the U.S., the Federal Communications Commission limits the power for wireless local area networks (WLAN). These limitations are designed to limit the distance a WLAN can transmit. The TPO (Transmitter Power Output) limitation for WLANs is 1,000 milliwatts.

Vendors of wireless network products also provide tools for measuring RF signal strength. The chipset in wireless devices provides the Receive Signal Strength Indicator (RSSI), a value used to determine when transmission is allowed and what transmission speed should be used.

Antennas are copper wires or similar devices with one end up in the air and the other attached to the ground or a grounded device. They are used to transmit and receive radio waves.

When transmitting, an antenna should be 1/4 the wavelength. The radio waves will be directed to strike the wire, which sets up voltage along the wire. This causes an electrical current to flow up and down the length of the antenna at the same frequency as the radio waves.

When an antenna receives radio waves, it also causes electricity to move up and down the wire. This motion is then picked up by the receiver.

Wave propagation is the pattern in which waves disperse. In wireless communications, one such propagation type is called sky wave propagation. The radio waves bounce off the ionosphere from the sending antenna to the receiving antenna. This type of propagation does not require the antennas to be within line-of-sight of each other.

Wireless local area networks use RF Line of Sight (RF LOS). This works along the same principle as visual line of sight, in which the sending and receiving antennas must be in a straight line with each other with no signal-blocking obstacles in between in order to communicate. Essentially, if they can’t see each other, they won’t be able to communicate with each other.

Multipath Distortion occurs when objects obstruct the signal. This does not necessarily completely block the signal, but can refract or diffract it. This happens more often with line-of-sight propagation than with sky wave propagation.

It is often necessary to know the degree of multipath distortion. Calculating the Fresnel Zone (pronounced fre-NEL) can help with this. Each Fresnel zone is a sausage-shaped area. Zone 1, where the signal is strongest, is a straight line from sender to receiver. The signal decreases in each successive zone.

A Look At The Fresnel Zone

Free Space Path Loss is a type of signal dispersion that represents the single greatest source of power loss in a wireless network. Radio frequencies begin to spread out the instant they leave the antenna and, as they do, the signal gradually becomes weaker. The rule of thumb while calculating this is that, with each increase of 6 decibels, the transmission range doubles. With each decrease of 6 decibels, the transmission range decreases by half.

Antennas have two basic characteristics. First, as the frequency increases, the wavelength gets smaller and the required size of the antenna is smaller. Cell phone antennas can be so small because the frequency they operate at is so high.

A Semi-Directional Antenna focuses its transmissions in a single direction. They are typically used as short- and medium-range wireless network bridges. They can, for example, connect two office buildings across the street from each other.

Highly-Directional Antennas are generally concave dish-shaped devices that send a narrowly focused signal beam. They are typically used for long-distance, point-to-point wireless links. They can connect two buildings 12 km (25 miles) apart but are not used for wireless local area networks.

Because wireless local area networks use omni-directional antennas, the access points should be near the center of the coverage area. The antenna should be positioned as high as possible, on a ceiling for instance, to maximize coverage area. If a high-gain antenna is used, a wireless network administrator should insure that users directly below the access point can connect to it. Outdoor antennas should be mounted above obstructions such as trees so that the signal is uninterrupted.

A Few Antennas To Consider