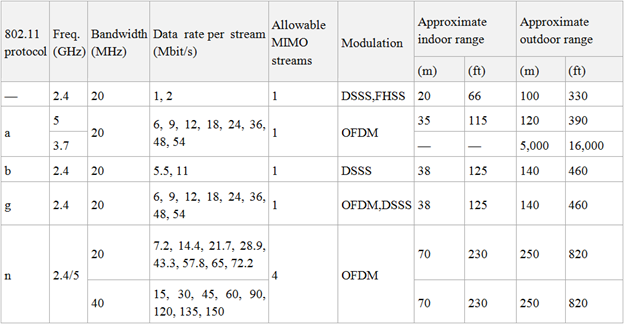 A comparison of the four best-known 802.11 standards. Image credit InfoSec

In 1978, the International Organization for Standardization (ISO) released the Open Systems Interconnection (OSI) reference model, which describes how computers with different specifications can be connected to a network. This was meant to portray the series of steps computers use to communicate over a network. The model was revised in 1983 and is still widely used today.

A more in depth discussion of the OSI model

Narrowband transmissions are vulnerable to interference from another radio signal being transmitted at or near the same frequency. If you have two stations transmitting powerful signals on two similar frequencies in the same area, they will interfere with each other. To help cut down on this problem, the Federal Communications Commission regulates the frequencies that radio stations in any given area can transmit on.

Frequency Hopping Spread Spectrum was a concept pioneered by two World War II-era Hollywood neighbors, Hedy Lamart and George Antheil. While they were discussing the problem of Nazis jamming the signal used for guiding U.S. torpedoes, music composer Antheil commented that it might be possible to coordinate rapid changes to a transmission’s radio frequencies in the same way he had once coordinated 16 synchronized piano players. Together, Lamart and Antheil worked on the idea and applied for a patent for their “Secret Communication System” in 1941. The invention called for slotted paper rolls similar to player-piano rolls to synchronize frequency changes in a radio transmitter and receiver. Originally, 84 frequencies were used. The concept was not implemented during the war, but, in the 1950s, the military applied the concept to secure military communications.

With FHSS, the radio frequency used for a transmission will change rapidly during the course of the transmission. The first short burst is transmitted at one frequency, the second at another frequency, and so on. The amount of time spent on a specific frequency is known as the dwell time, and the sequence of changing frequencies is known as the hopping code.

FHSS is not widely used in WLAN systems; however, Bluetooth does make use of it in the 2.4 GHz frequency. Bluetooth changes frequency 1600 times a second.

Direct Sequence Spread Spectrum (DSSS) is a modulation technique. Like all other spread-spectrum techniques, the transmitted signal takes up more bandwidth than the information signal that is being modulated. This technique makes use of a continuous string of pseudorandom PN code symbols known as “chips.” These chips have a shorter duration than an information bit because the information transmitted using this method is modulated by a sequence of chips. DSSS also uses a signal structure in which the sequence of chips produced by the transmitter is known a priori by the receiver. The receiver can then use the same PN sequence to counteract the effect of the PN sequence on the received signal in order to reconstruct the information signal.

DSSS makes use of a pseudorandom transmission sequence of 1 and -1 values and multiplies the data being transmitted by a “noise” signal. This creates a transmission frequency much higher than that of the original signal, thereby spreading the energy of the original signal into a much wider band. This creates an effect similar to “white noise” or static; the only real difference between this and actual static is that a receiver can extract meaningful data from the transmission by multiplying it by the same pseudorandom sequence. This process is known as “de-spreading.”

The resulting effect of enhancing signal to noise ratio on the channel is called process gain. This effect can be made larger by employing a longer PN sequence and more chips per bit, but physical devices used to generate the PN sequence impose practical limits on attainable processing gain.

If an undesired transmitter transmits on the same channel but with a different PN sequence (or no sequence at all), the de-spreading process results in no processing gain for that signal. This effect is the basis for the code division multiple access (CDMA) property of DSSS, which allows multiple transmitters to share the same channel within the limits of the cross-correlation properties of their PN sequences.

As this description suggests, a plot of the transmitted waveform has a roughly bell-shaped envelope centered on the carrier frequency, just like a normal AM transmission, except that the added noise causes the distribution to be much wider than that of an AM transmission.

In contrast, frequency-hopping spread spectrum pseudo-randomly re-tunes the carrier, instead of adding pseudo-random noise to the data, which results in a uniform frequency distribution whose width is determined by the output range of the pseudo-random number generator.

Benefits of DSSS include resistance to intended or unintended jamming, sharing of a single channel among multiple users, and a reduced chance that a transmission will be intercepted.

The IEEE also subdivided the Physical (PHY) layer into the Physical Medium Dependent (PMD) and Physical Layer Convergence Procedure (PLCP) sublayers. The PMD sublayer makes up the standards for the characteristics of the wireless medium, such as DSSS, and defines the method for transmitting and receiving data through that medium. The PLCP sublayer reformats the data received from the MAC layer (while transmitting) into a fraim that the PMD can transmit. PLCP also “listens” to the medium to determine when data can be transmitted.

The IEEE WLAN standards specify that the functions of the Physical and the Media Access Control layers should be transparent to the upper layers of the IEEE model, so that no other modifications to the other layers are needed. To accomplish this, some of the networking features usually associated with the higher layers of the OSI model are performed at the MAC layer for wireless LANs.

Considering how brief the history of wireless networking is, it might sound odd to refer to some wireless devices as “legacy.” However, wireless technology has advanced so rapidly that most of the earliest WLANs would now be considered obsolete. Two such obsolete standards include the original IEEE 802.11 standard (with no letter) and HomeRF.

The IEEE 802.11 standard of 1997 allowed for cable-free data access for clients in a mobile or fixed location with a speed of up to 2 Mbps. These devices could use either FHSS or DSSS for RF transmissions, but FHSS and DSSS devices could not “talk” to each other. 802.11 also allowed for diffused infrared transmissions.

HomeRF was based on a protocol called the Shared Wireless Access Protocol (SWAP), which had been established by the HomeRF Working Group. This group was made up of over 50 companies which manufactured and sold home electronics. This protocol defines a set of specifications for wireless data and voice communications around the home. Devices could be as far apart as 45 meters (150 feet) and had a speed of up to 10 Mbps. Devices could include computers, cordless phones, and home entertainment equipment. HomeRF was never as popular as IEEE WLANs and the HomeRF Working Group disbanded in 2003.

The basic purpose of the 802.11 PHY layer is to send and receive signals to and from the network. It is divided into the PMD and PLCP sublayers.

The 802.11b Physical Layer Convergence Procedure (PLCP) standards are based on DSSS transmissions. While preparing data for transmission, PLCP reformats data received from the MAC layer into a frame that the PMD sublayer can transmit. This frame consists of three parts. The preamble prepares the receiver for the rest of the frame. The header consists of information about the frame itself. Lastly, the data, or payload, portion of the frame consists of the actual data being transmitted. The payload can be anywhere from 1 to 16,384 bits in size.

The Header consists of 4 parts. The Signal Data Rate defines the designated speed of the signal. The Service field is typically set to 00000000 and is reserved for future use. The Length consists of the value of the length of the frame. The Header Error Check field contains data that can be used to check for errors upon receipt of the frame.

The Data part of the transmission only consists of the Data field which contains the information to be transmitted. The Preamble and Header are always transmitted at 1 Mbps. This allows slower devices to talk to faster ones.

Once the frame is created, the PLCP passes it on to the Physical Medium Dependent (PMD) sublayer. The PMD’s job is to translate the 1’s and 0’s of binary language into radio signals for transmission. The 802.11b standard uses the Industrial, Scientific, and Medical (ISM) band for its transmissions and specifies 14 frequencies that can be used, beginning at 2.412 GHz and incrementing by .005 GHz, except for Channel 14, which is 2.484 GHz.

802.11b also defines the type of DSSS coding to be used. DSSS uses expanded redundant code, also known as Barker code, to transmit each data bit. This code is used when transmitting at 1 or 2 Mbps. For rates above 2 Mbps, complementary code keying (CCK) is used instead. This coding consists of 64 8-bit code words that have unique mathematical properties which allows a receiver to correctly read them.

802.11a is a bit of an oddball, in that IEEE released this standard after 802.11b. Revisions to the Physical layer of 802.11a allow it to transmit at speeds up to 54 Mbps. This increase of speed was primarily due to its use of OFDM multiplexing. 802.11a also introduced improved error checking, a higher frequency, and access to more transmission channels.
This standard makes use of the Unlicensed National Information Infrastructure (U-NII) band. This band is intended for devices that provide short-range, high-speed wireless digital communications.

U-NII makes use of frequencies between 5.15 and 5.825 GHz. These frequencies are divided up into four bands, each of which have a maximum power output.

One disadvantage of U-NII is that, in some countries, the 5 GHz bands are allocated for uses other than WLANs. In Japan, U-NII 3 is reserved for outdoor applications. In Europe, U-NII 1 has a maximum power output of 200 mW instead of 50 in the U.S. This is generally not a problem for WLANs confined to a single country, but international companies and travelers may find it necessary to maintain different networks in different countries.

Another disadvantage relates to the growing amount of outside interference. A growing number of electronic devices, including cordless phones, are beginning to operate within the 5 GHz range. Such interference is a major source of problems for WLANs.

The PLCP standard for 802.11a is based on OFDM. Like in 802.11b, the PLCP sublayer is used to format data for transmissions and the generated packets include a preamble, a header, and the data.

The success of the two previous standards prompted IEEE to revisit them both to see if they could create a hybrid of the two that would bring out the best traits of both. They also received input from a number of chip manufacturers, who had a stake in the outcome. The result was IEEE 802.11g, which was released in June 2003.

802.11g maintains backwards compatibility with 802.11b devices, making it easy for 802.11b users to upgrade simply by replacing the APs.

802.11n makes use of multiple antennas to create the ability to send and receive signals at the same time. This is called Multiple Input, Multiple Output (MIMO). MIMO can handle up to four MIMO streams at the same time. It can handle speeds up to 300 Mbps. If you bought a “pre-n” device before the standard was officially released in 2009, you may have realized that it was a marketing gimmick by now and upgraded the firmware to match changes from initial drafts and make sure it stays functional.

You were obviously paying attention if you knew about a new standard called 802.11ac. It features more channel bonding, denser modulation and double the MIMO channels of 802.11n.

Wireless Networking Supplies For Your Consideration