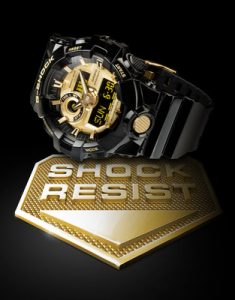 The GA710GB-1A in glossy black with gold IP front button and buckle, part of the new Garish Color Series. It is recommended to purchase all Casio G-Shock watches from authorized retailers like Bloomingdale’s.

Casio G-SHOCK announced the new premium variation of the GA700 base model, the GA710, in the new Garish Color Series which features a metal front button and stainless steel buckle, along with a metallic dial on the face. The new models with garish coloring create the image of the accessories or fashion items worn by b-boys. 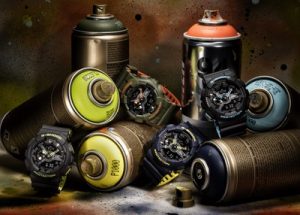 Casio has also unveiled the new Layered Neon Color series, which styles the GA110 model with a dark base accented by vibrant neon colors just in time for spring. Developed using a bi-color molding process to showcase the various hues in the design, each watch includes an overall matte finish, layered with pops of color on the buttons, face, hands and underneath the band. This style was inspired by the bright colors found on sneaker and athletic apparel to highlight the ability of G-Shock watches like these to keep up with everyday athletic activity without letting you down.