Washington D.C. is a big city and a bit of a maze for a person who is visiting for the first time. I was on my way to the Million Martian Meeting organized by the Aspiring Martians Group (AMG for short; I like acronyms), walked a little too far, and backtracked to find the Marvin Center. My father was with me – I introduced him as a relative who was a little bit curious about what Mars One is about. For those of you who haven’t heard, Mars One aims to put a settlement on Mars by 2023. This simplifies the plan by eliminating the return trip, complicates it by the need to support people on Mars for the rest of their lives and should inspire people to dream big. 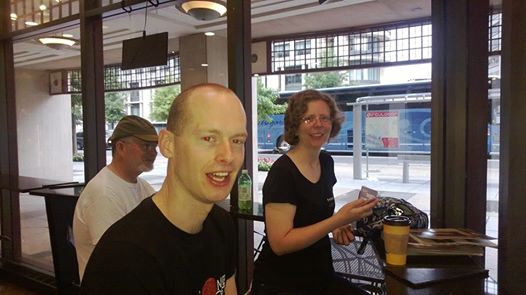 Bas Lansdorp, with me in the background. Image credit Randy Bevines

Now that we knew where the place was, we found a little nearby cafe to eat breakfast. While we were eating breakfast sandwiches, a couple of people with Mars One themed T-shirts walked in. I will admit I didn’t look very closely here or I might have noticed that those T-shirts aren’t exactly available in the Mars One online store. Actually, I maybe just glanced their way a couple of times until they sat down next to me and said hi. (That’s me sort of photobombing in this picture.) So I introduced myself.

“Oh…You’re Bas Lansdorp, right? Awesome.” I clue my father in. “He’s in charge of Mars One. You know?”

It’s obvious he doesn’t even though I’m sure I must have mentioned Bas Lansdorp to him at some point. “Sure.”

I’m sure I sort of looked like I just got punched between my eyes right about now. All the restaurants in the vicinity and I’m having breakfast at the exact same one he chooses. Way cool, right? So we chat a bit. He asks me if I’ve applied.

“Sure; I applied as soon as I could.”

My father hasn’t, but then, I haven’t really expected anyone in my immediate family to. Like I said, he’s just curious about why I’m so enthusiastic about it. So we finish breakfast and, together, we head to the Marvin Center, catching up with a few Aspiring Martian Group administrators along the way: a fellow with green hair and green glow-in-the-dark antennae who turns out to be Austin (to Mars) Bradley, Joseph Sweeney, and a bearded hotel manager in a baseball cap who is another administrator named Aaron Hamm. We stop just long enough to get this picture: 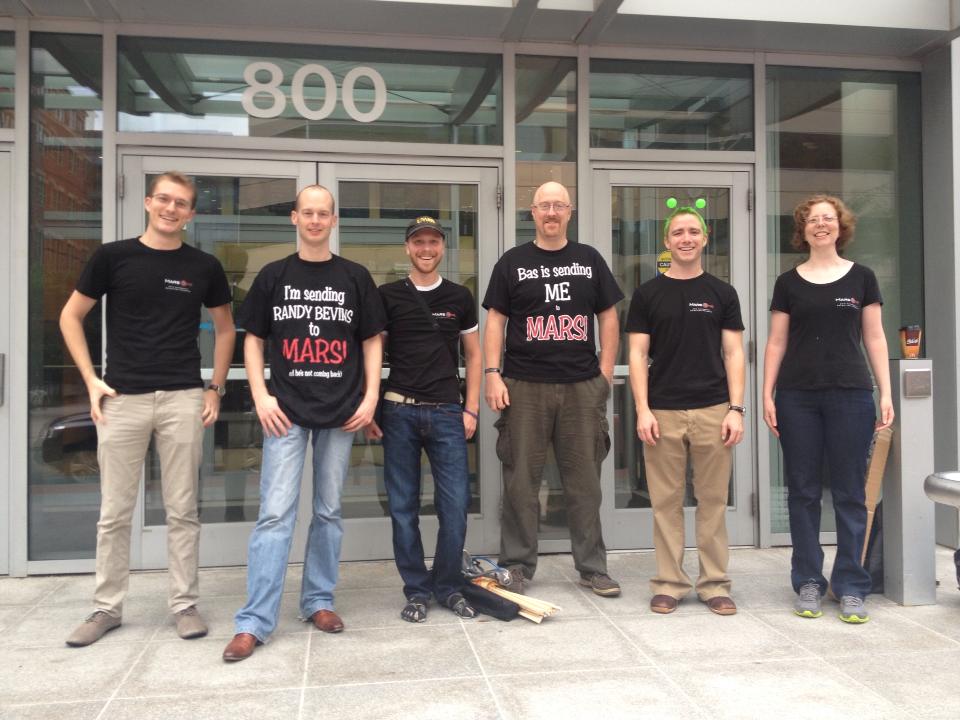 Me, Bas, Randy and about half of the AMG admins. Image credit Austin Bradley

So we head up to the amphitheater level. There’s a few reporters with cameras about, and I’ll hear later that Fox News is looking for my name so they can include a picture or two with me in it. We chat a bit, and I meet a few others. We start talking about our reasons for applying. That’s such a complicated one for me, it’s hard for me to boil down into a few sentences. I’ve never been able to do much more than offer moral support for space exploration efforts. I see Mars One as a chance to roll up my sleeves and participate, even if it means I’ll never see Earth up close again once we’ve launched. I forget exactly what I said but it can’t have been very memorable. I’m not a very good off-the-cuff speaker. 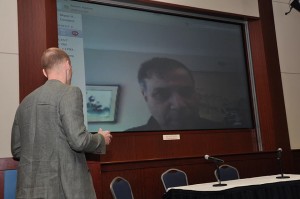 Getting connected with Robert Zubrin on Skype (Bas Lansdorp in the left corner). If you haven’t already, read his book, The Case For Mars. Image from AMG.

Then, it’s showtime, and we find seats. Up first is Robert Zubrin, who is beaming in through Skype. He’s a respected aerospace engineer, a founding member of the Mars Society, and is perhaps best known for being an advocate for Mars exploration and the author of The Case For Mars. The Mars Society operates Mars habitat simulators, one called the Mars Arctic 365 in the Arctic Circle and the other called the Mars Desert Research Station in Utah. During his talk, he invited Mars One to use the simulators. I hope that Mars One takes him up on the offer. If you can survive a full year in the cold, isolated location of the Mars Arctic 365 without losing your marbles, you might well be a viable candidate for Mars One.

Next up is a screening of the new documentary “One Way Astronaut.” If you weren’t at the Million Martian Meeting, here’s the official trailer:

It features Bas Lansdorp, some space experts who answer questions about the feasibility of Mars One and four of the applicants who talk about their decision to apply. They’re real people – one is a private pilot and another is seen playing with a kitten. You can find the documentary at Onewayastronaut.com to watch it for $2.95 or download it for $4.95. Half the price supports Mars One. (Legal disclaimer: You should get permission from One Way Astronaut before hosting screenings of your own.)

So, time for lunch. The audience scatters to get food from nearby restaurants. My father and I go back to the same place we had breakfast to get sandwiches. After all, why mess with success? Anyway, we brought our sandwiches back to the Marvin Center, which apparently also hosts a dining area for George Washington University students during the fall and spring semesters. We share a table with David, a retired optometrist. I vaguely remember seeing his video on the Mars One site (Nice T-shirt, Dave, and nice to see that you’re as excited about this project as the rest of us).

Bas Lansdorp sits at our table (Sweet!) and, as we chat, somebody brings him a burger and fries from a place called Johnny Rockets. The fourth AMG administrator present, an ER physician named Leila Zucker, walks over to give Bas a hug. She is obviously very enthusiastic about Mars One.

“Oh my gosh, so many of my friends are vegetarians, it’s nice to meet somebody who isn’t.”

Bas was nice about it though I happen to think it’s a bad idea to sneak up on somebody to give them a hug. I’ve heard of war veterans flipping people over their shoulders for the exact same thing. Of course, we talk about Mars One. She’s interested in what kind of government we’ll have on Mars.

“Democracy, I suppose,” I comment. Letting each person have one direct vote on any issue sounds fairly simple when you have a small population and the colonists won’t really need to send people to the seat of government. She has a different word for it – “Consensus.” I like that word better. To me, it implies that we’ve talked out any issues until we came to some kind of reasonable compromise instead of trying to defend our own camps to the point of stalemate.

I’m rather interested in one issue that’s come up in unofficial forums. What if Earth-based governments get in the way? So I ask Bas if he has anticipated any legal issues from any of the nations that are involved. And I learn something new. Rockets built in the USA aren’t really supposed to leave the country, especially when they could theoretically be used to deliver a weapons payload at a distant target. It makes sense when you consider what could happen if al-Qaeda gets hold of a Falcon Heavy. However, it could become a real nuisance if the U.S. Government suddenly starts throwing up obstacles.

Bas isn’t very worried. He hopes that public awareness and support will reach the point that, by the time hardware is ready for launch, the U.S. government won’t really have the will to fight it if launch occurs at, say, one of the Cape Canaveral launch complexes that NASA is quietly leasing out. He figures some nations might ban their candidates from participating, but would they want to lose the prestige that comes with having an astronaut living on Mars?

At about 1:00, we begin drifting back to the amphitheater. My father and I can’t stay much longer due to a flight we need to catch (!) but we have time to watch the Aspiring Martians Group administrators answer questions as part of a panel. It’s entertaining. They give each other nicknames: Aaron Hamm becomes “the Olympian” because he has a relative who competed in the Olympics and Leila Zucker becomes “Dr. Leila”. Like many of the applicants here, they all have dreamed of going to Mars since they were kids. Dr. Leila sings. 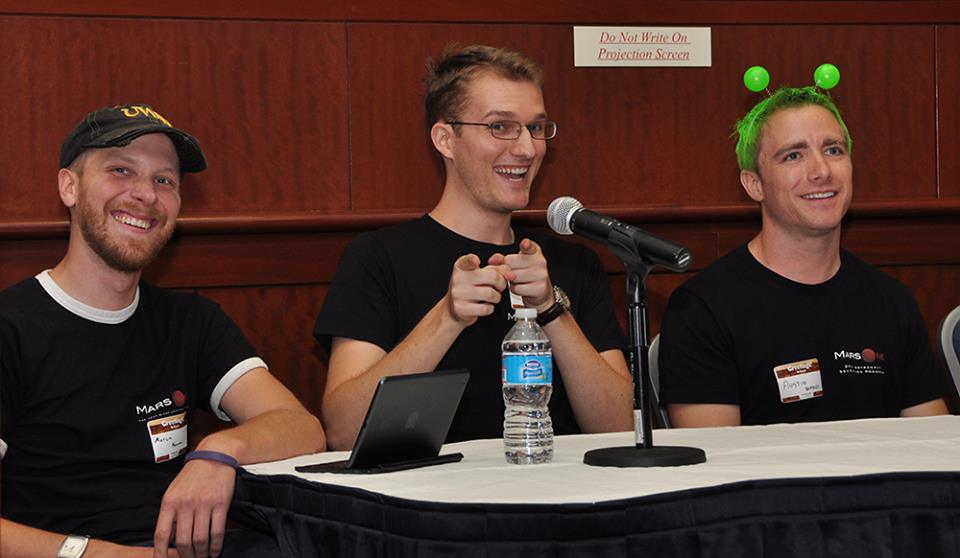 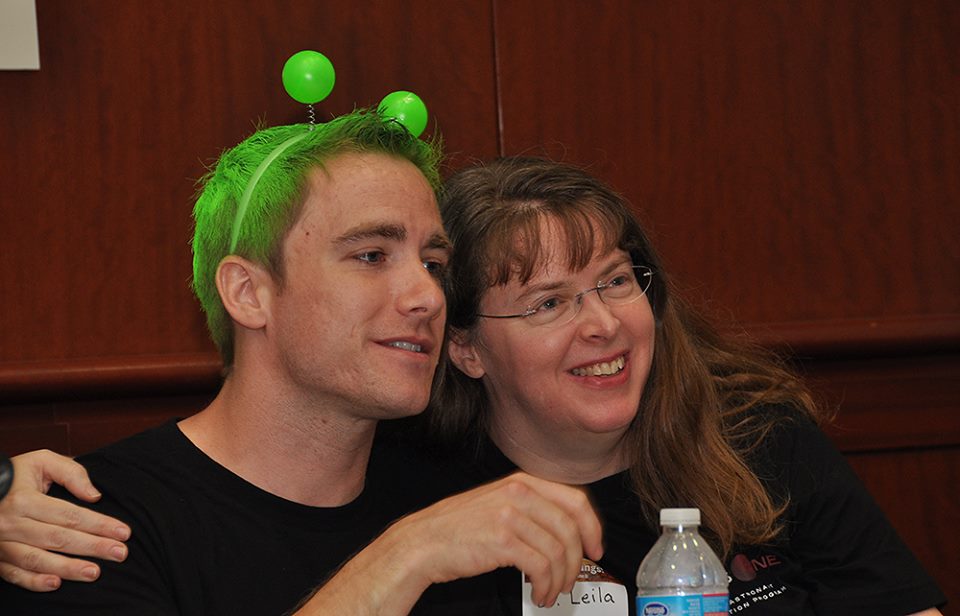 Austin to Mars with Dr. Leila on their discussion panel.

Unfortunately, I had to go just as they were getting done, so I missed Bas Lansdorp’s talk. However, getting to have breakfast and lunch with him made up for it and I’ll probably get a recap once the videos are posted on Vimeo or Youtube. “Million Martian Meeting” was a bit of an exaggeration since there were about 60 people in the audience and 60 more watching the streaming video. However, big dreamers like every single Mars One applicant won’t mind a bit of exaggeration and it was still fun.