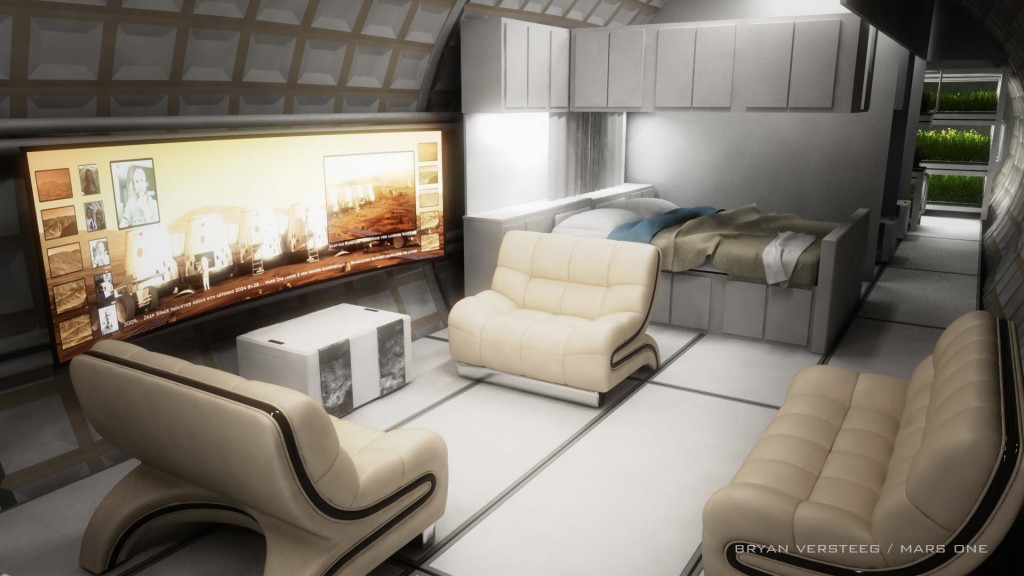 A proposed interior design for the Mars One habitat. Image credit Bryan Versteeg

Yesterday morning, I danced a little happy jig in celebration of the beginning of Round 2 of the Mars One selection. I am one of the 0.5% of the applicants who were selected to advance to the next round. Basically, we’ve been whittled down from over 200,000 applicants to 1,058 who will likely travel to regional headquarters for interviews. I am beginning to like the odds.

For the ones who didn’t make it, I hope that you stay involved. A handful of people have suggested to me that there could be ground crew positions available if I don’t make it all the way. Even if you decide not to earn a living by helping Mars One (!!), it may help to do a candid self-assessment of why you didn’t make it this time. Some might want to work on becoming more comfortable in front of a camera. Others may want to brush up on their credentials and review the list of qualifications for an honest self-assessment for any personality flaws that may have hindered their application the first time around. The important thing is to stay busy and not give up just because you weren’t selected this time around.

For those of us who did make it, 2014 is going to be busy. I’ve already gotten requests for interviews from various media venues. I’m also gearing up for whatever form that the Round 2 selection takes. We’ve made it this far, but the hard work is about to begin. That means nobody should get complacent at this point. Some of us might freeze up when they finally get in front of the selection panels. Others might make a fatal mistake without even realizing it. The best candidates will remember that the selections are supposed to be tough and won’t let themselves get thrown by anything that the panel asks them.

Sounds like I’m stating the obvious, doesn’t it? I just see it this way. There were indications that some of those who were already eliminated just didn’t take it seriously enough. I’m not talking about the ones that never made it past the application fee, though there were likely plenty of those. I mean the ones who shot their application videos in the nude as Bas Lansdorp mentioned in this article, and I hope the selection committee at least got to see a couple of impressive physiques. I know that one of the requirements is a sense of humor, but we can’t afford to give the panels any indication that we don’t take this project seriously now. So be sure to check any negative attitudes and sarcastic comments you have towards any aspect of the mission and make sure you’re not being unreasonable about it. Some mistakes that should be avoided include:

Probably a lot of this sounds obvious now, but people WILL forget them when dealing with the stress of the Round 2 selections and moving on beyond Round 2 in the event that you did well enough to advance to Rounds 3 and 4. We’re still competing with more than a thousand highly motivated people with the likelihood of being placed under a highly public microscope. We’re all going to get stressed out and want to get royally sloshed at some point during this whole thing, in which case I just recommend finding a pillow to punch.