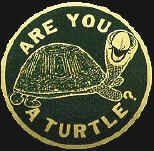 The turtle could spend his whole life hiding in his shell, or make progress by sticking his neck out. Are you a turtle? Image credit Wally Schirra

If you’ve been paying attention to the space exploration headlines lately, you might think that those of us who are serious about volunteering for a one-way trip to Mars are fearless. We’re basically signing up for the difficult and dangerous job of demonstrating that a long-term settlement on the Red Planet is feasible and we’re making clever (or maybe not-so-clever) one-minute application videos to prove it. However, some of us aren’t really all that fearless. Maybe it’s just that we can look straight in the face of whatever scares us if we think it’s going to help the cause of colonizing Mars.

You would think that someone who doesn’t flinch at the idea of riding an overgrown firecracker to Mars wouldn’t think twice about doing an interview. Maybe there are Mars One candidates who enjoy the attention and the interviews, but I’m not one of them. Just a little bit ago, my palms were all sweaty when I did a Skype interview with Josh Turnball for his vlog and I felt all twitchy (or maybe it was just that my cat Rudy seemed intent on nibbling on my fingers, that naughty little kitty). I hope I didn’t talk too quickly as I have a habit of doing when I’m nervous. I know that nobody ever died of doing an interview, but it’s pretty hard to convince the parts of my brain that control emotion. Even with my nerves, I went through with the interview, because I know that it’s moderately important that us Mars One candidates get used to doing media events and interviews and even possibly making public appearances in various places.

Other applicants might have their own fears. A while back, a member of the Aspiring Martians Group who lives in a not-very-friendly part of the world considered backing out because she was worried that something might happen to her family if she stayed involved. A handful might still back out when the full implication of what it means to spend the rest of their lives in a cramped space on an alien world hits them. (Not you? Well, we’ll see how you feel when we’re four months into a one-year training jaunt somewhere in the middle of the Arctic.) Maybe one of the final four will insist that the cabin our our spacecraft be completely swept of spiders. Even if one or another don’t show they’re scared, they might admit later that they felt like they had butterflies in their stomach.

I wonder if part of the Round 2 proceedings will involve facing the one thing we’re most afraid of. That’s probably where a lot of us are probably going to freak out. Some of us can roll up our sleeves and let that pet spider crawl up and down our arms and others just won’t be able to. I just hope they don’t go overboard because I might have certain logical objections to walking through a wall of flame. It might even be good for some people. If they are truly determined to colonize Mars, they’ll be able to face their fears squarely even though their hands might be shaking, and then they might end up wondering what they were so afraid of. It would certainly make a good test of courage.

So I’ll keep doing those interviews even though they scare me, because I’m sure a lot of people in my area would be excited to know that someone local has signed up for a large international effort like Mars One. It’s worth doing because, while Mars One founder Bas Lansdorp is very good at marketing, I figure that we could use all the media attention we can get.