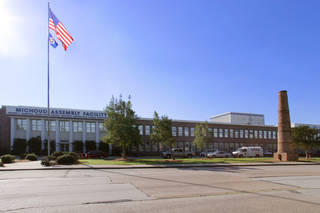 A view of one of the buildings at Michoud Assembly Facility’s New Orleans location. Image credit NASA

All 3,500 employees at buildings in New Orleans belonging to NASA’s Michoud Assembly Facility have been accounted for after a tornado caused damage on the morning of Tuesday, February 7. Five people sustained minor injuries.

“Our hearts go out to our employees and the people in New Orleans who have suffered from this serious storm,” said Keith Hefner, director of the facility. “The safety of our team is always our main concern, and we are pleased to report that we’ve identified only minor injuries.”

Michoud Assembly Facility resides on an 832-acre site in New Orleans. It is owned by NASA and administered by the Marshall Space Flight Center. Its duties include manufacture and assembly for critical hardware components for exploration vehicles under development at Marshall and other NASA centers. Michoud is also responsible for the iconic Vehicle Assembly Building at Kennedy Space Center in Florida, at which the space shuttle stack went through final assembly before its rollout to the launchpad. Its New Orleans facilities is responsible for critical components that will be used for the SLS and Orion spacecraft.

An initial inspection revealed no damage to hardware earmarked for these systems that are currently residing at the New Orleans facility. Unfortunately, the tornado did damage to hardware used for the space shuttle that included an external tank, as well as building numbers 103, 350 and additional structures around Michoud, 200 marked cars and roads near Michoud. The worst damage discovered so far is to parts of the roof on Building 103, which is Michoud’s main manufacturing facility. Hefner praised the facility’s dedicated personnel for their smooth implementation of the emergency plan during and after the tornado in a statement made on Tuesday.

Recovery efforts are underway. The facility is currently closed as emergency personnel assess the damage and utilities are secured and restored.