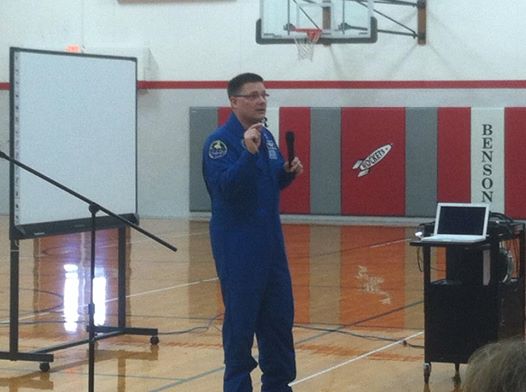 So I get a phone call from my father at 11:00 yesterday morning (2/7/14). “Hey, be ready to go in ten minutes, there’s an astronaut speaking at the school!” Whaaa-? Roanoke-Benson is a pretty small little school district. It would be hard to imagine NASA sending a real, live astronaut to a town the size of Benson if something wasn’t up.

We get to the school pretty quickly – And I’m in my Mars One hoodie, by the way. I didn’t even think anything was really going to happen today, but at least I’ll get some free publicity for Mars One out of it. Doug Wheelock is actually the second astronaut I’ve seen in person. The first was Apollo 12’s Richard Gordon, whom I met at a one-day Star Trek convention and made sure to get his autograph, but that’s a whole different story. Anyway, so we got there, and of course there’s all the sixth, seventh and eighth graders along with a group of teachers and a local TV station reporter complete with oversized video camera, gathered on the bleachers in the gym. Turns out this was the “prize” for winning a poster contest that the Challenger Learning Center in Normal, Illinois put on as part of its tenth anniversary celebration. I even got a brief peek at the poster. It was pretty darned good for having been done by a bunch of middle schoolers.

The astronaut is introduced by one of the “flight directors” at the Challenger Learning Center. His name is Doug Wheelock, an astronaut who flew on the Space Shuttle Discovery on STS-120, one of the assembly flights that brought components up to the International Space Station, and also served as a Flight Engineer for Expedition 24 and commander of Expedition 25 on the International Space Station. So no kid is gonna be tugging on his pants leg and going, “Hey, buddy, aren’t any of the real astronauts coming?” like what happened to Apollo 11’s Michael Collins when he was still a rookie.

Doug Wheelock turns out to be a pretty cool dude. He tells a couple of stories from his time on the space station, even mentioning the time the ATM alarm went off. It’s part of a system that monitors the air that the ISS crew breathes. The way he tells it, by the time astronauts get as far as the International Space Station and maybe even well before they ever thought of applying, they are pretty well conditioned not to panic in a crisis. They just go into troubleshooting mode. So nothing’s on fire, there’s no dangerous carbon dioxide buildup, and there’s no toxic fumes being emitted by anything. False alarm; that happens sometimes. A lot of the time, being on the International Space Station feels like being an orbiting fix-it man. His point is that the same problem-solving skills that are so often used in math class can be further developed to solve problems in real life.

He also talks about pursuing one’s dreams. It means finding what he calls the “balcony people” who cheer you on the way that parents cheer on their kids at a basketball game. It also means avoiding the “basement people” who say you will never achieve your dreams without ever offering any constructive advice. It means deciding who your real friends are rather than simply having as many friends as possible without deciding whether they will be good friends or not. One of the kids who dreams about being an artist handed him a picture drawn on a piece of notebook paper to take into space, and Doug Wheelock said he would if he gets to go to the International Space Station again.

Question time. They dismissed most of the kids a couple of questions in, which I thought had to be a bummer to them, but the seventh graders got to stay. This is where I see how smart a seventh grader can be. One asked about rehabilitation efforts after spending so many months in microgravity. Astronauts often take a while just to regain their sense of balance and they aren’t supposed to drive at first because seeing things come at them at high speeds can be disorienting after just watching everything float. Even just running outside can be a risky proposition when an astronaut who has just gotten back from the space station sees a bicycle coming at him.

Another good question: Astronauts tend to get taller in space; how does that work exactly? What happens is that the spine no longer has any pressure pulling it into its proper shape, so it has a tendency to stretch so that an astronaut can become one or two inches taller. They actually have to work that into creating pressure suits for space station crews with extra materials that account for the extra height. It’s obvious that at least a few of these kids have done their homework. 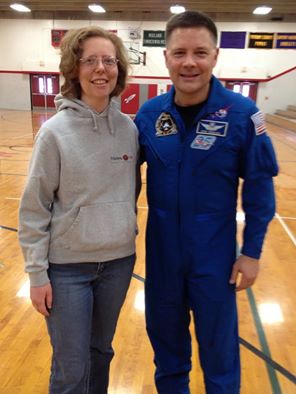 Me and Doug Wheelock who looks so handsome in his NASA astronaut uniform.

Afterwards, they take a few pictures. They get a group picture with Doug Wheelock and the seventh grade students. Then, he gets one of just the students. Then it’s time for some group pictures. Then the kids take off for lunch – it’s 12:45 by this point and the kids, being typical children, are hungry. Doug Wheelock spends a few minutes doing an interview for the local TV station.

I chat with the Challenger Learning Center flight director for a moment and mention that I’m a Mars One candidate. She goes over to Doug Wheelock and, I didn’t exactly hear what she said though she must have mentioned Mars One, and he comes over to say hi. I must have come off as a tongue-tied fan chick at this point. You would think that I’d be used to being around celebrities from all the Star Trek conventions I’d been to, but about all I get out is that I’d love to go to Mars when he asked. We take a couple of pictures, and then my father and I head out while he goes to the cafeteria. The last I saw of Doug Wheelock, he was just sitting down with the kids and they were all like, “Sit here! Sit here!” I laughed a little at that as he found a seat somewhere in the middle of that group of seventh graders. It must be nice to be so popular, and I imagine that they peppered him with all kinds of questions. He was obviously having fun. So I had a good time spending part of the morning watching Doug Wheelock give his speech, and congrats to those kids for winning that Challenger Learning Center poster contest.