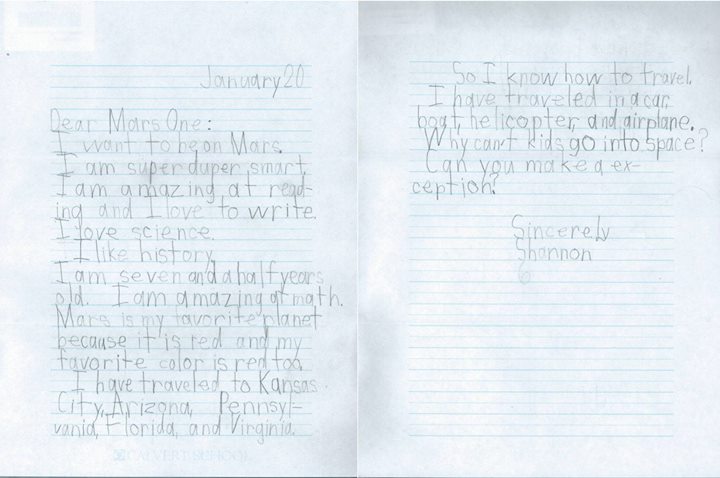 The above letter is pretty good for a seven-year-old, isn’t it? She is obviously very enthusiastic about the idea of going to Mars and I hope she won’t be too disappointed that she will have to wait. The truth is, I could see entire families traveling to Mars once we have everything we need to support them and going to Mars becomes a bit of a longer ride but really no more difficult than taking a train ride is now. Right now, kids will have to simply consider this a lesson in patience. The Shannons of the world might find it a little difficult to maintain their enthusiasm when the answer is, basically, “Not right now.” However, by the time they earn their college degrees, we will have made a good start towards the time when kids can actually go to Mars.

I’ve hammered on the subject of having kids on Mars and I know it sounds like I’m kind of repeating myself. For all I know, Shannon is a well-behaved little girl who rarely so much as stomps her foot when she becomes angry and she actually seems to enjoy learning about science and history. Many other kids aren’t like Shannon. You remember all those times you were in a restaurant and a couple of toddlers just kept running around and screaming and the parents did nothing to stop them. If I’m in a high-stress environment like the Mars One colony and somebody’s brat does that, I’d probably just do a Doctor McCoy and smack that kid across the face at full strength with no apology and no regrets. That’s one reason I have very little patience for the people who seem to expect that we’ll just go to Mars and start popping out babies. Yes, Virginia, there is a Santa Claus, but he’s going to give you a lump of coal if you misbehave.

Dr. McCoy Doesn’t Put Up With Much

Fast-forward a few hundred years. There’s probably a few Aldrin cyclers going back and forth between Earth and Mars by the year 2500. Mars is still a little bit like the Wild West, but it’s becoming more civilized. The Shannons of this theoretical future scenario could travel to Mars with her family when they buy one-way tickets to settle in the largest Martian colony. By this point, it will be largely expected that kids know how to behave themselves and help with the chores. Shannon can be largely accepted simply by demonstrating that she knows how to behave in public and showing promise as a hydroponics engineer. Her parents may be astonished by how well she adapts to the new world and I hope they will be open-minded enough to accept that our future Martian society may well be very different from what they’re used to Earth. Shannon will have to live in this new world and the old moribund attitudes of Earth natives could only hold her back. There’s a reason that a lot of Martians look down on immigrants on Earth and call them “Terries.” We’ve had enough immigrants come in and start proselytizing about our shocking morals to be wary of these newcomers. We’ve even had to do some pretty firm stomping at times because we’ve learned the hard way that Terries can be very unreasonable about the marriage thing or the fact that we consider it extremely rude to flout one’s religion in public. Just dealing with that Westboro branch-off pretty well sealed our reputation of being unfriendly towards immigrants, and how did they slip past the psych checks on Earth that’s supposed to weed out the worst of that sort of thing anyway? However, we may forgive her for having moved to Mars when she was seven years old if she adapts very well to her new surroundings.

I hope to see Shannon on Mars someday. If she keeps up the kind of enthusiasm she showed in this letter and Mars One is still around when she is ready to join our colony, it would be good to see her among the fresh faces we’re going to get every couple of years. There might be very few seven-year-olds on Mars for quite a while, but that doesn’t mean I’m going to be the one to kill a dream. This will just give us more time to get Mars ready for those enthusiastic young girls and boys who want to join the growing movement of future Martian colonists.

Shannon might not get to Mars right away, but with these Lego kits, kids like her can have fun pretending that they’re exploring space.