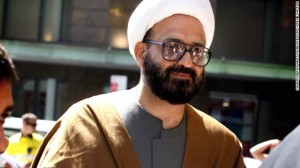 Man Haron Monis has been identified by unofficial sources as the gunman who took hostages in a Sydney cafe. Image credit CNN

The hostage situation in a Sydney cafe ended earlier today with commandos storming the cafe, leaving three people dead. Reports say that the hostage takers were led by a self-styled Muslim cleric named Man Haron Monis, an Iranian refugee whose previous run-ins with the law include a conviction for writing threatening letters to the families of Australian service members.

The situation has been enough for the Australian Muslim community to become nervous. Women are removing their hajibs when they go out in public because they fear that they will be blamed by frustrated strangers for the actions of a few men. It would be very easy to blame Islam for the bad actors who use their faith as an excuse for criminal and violent behavior. The actions of people like Man Haron Monis often cause people to wonder what it is about religion that attracts the people who are sick in the head or are willing to use it as a base for their own power. Some of them might become angry enough to take it out on innocent people who are of the same faith but are just going about their business like everybody else.

I’ve made the occasional snip about religion in general myself because I see so many stories about people who use it as an excuse for violent behavior. It gets frustrating. However, realistically, the religion is just an excuse. The problem is that people like Man Haron Monis and organizations like ISIS would still be a pack of scumbags without Islam. They’re the ones who make normal mainstream Muslims look bad and feel like they have to go undercover to avoid being lumped into the same group as this wannabe cleric.

Mainstream society should never tolerate the people who use religion for selfish or violent purposes. Ever. The point of a gun is the only reasonable answer to people like Man Haron Monis who terrorize people who believe differently than they do. It’s fortunate that people like him are in the minority, but the minority can still do a lot of damage if normal people don’t stand up to them. I was happy to hear that five hostages escaped on their own. These were brave people who may have saved their own lives and definitely ticked off Monis by refusing to cooperate with hostage takers.

Situations like this can also bring out the best of people. People are volunteering to ride with Australian Muslims who might fear for their safety. The hashtag #illridewithyou went trending on Twitter. These are decent people who don’t blame an entire religion for the actions of a few bad actors.

I don’t support banning religion as a few people have suggested for the same reason that I don’t support banning guns and eliminating money. These things mean nothing unless people actually use them. People were murdering one another long before guns ever existed. Even in a society without money, two people can get into a fistfight because one of them ate more than his fair share of the food. I’m still waiting for somebody to start a brawl with the Westboro Baptist Church but they would still be a bunch of loudmouthed bigoted jerks without the Baptist label. Banning religion would be pretty pointless when you think of all the petty dictators who have tried to do exactly that with very few results except forcing the religion underground.

If you are a believer in any religion, you should always remember that this kind of behavior reflects on you even though you might be the decent sort who creates quilts from donated fabric to send to poor people in Africa. The absolute best thing that the average believer can do is refuse to endorse or support the bad actors and speak up if you think they’re up to something.

Hostage situations stink, and it’s doubly bad when innocent third parties like that woman who took off her hajib on a bus because she was scared that she would be attacked by angry non-Muslims get caught up in the whole thing. She was lucky because she found somebody who was willing to ride with her and protect her from retaliation. It’s hard for me to feel sorry for hostage takers like Man Haron Monis when he’s on the same level as every bank robber who doesn’t care who dies as long as he gets what he wants. I just feel bad for innocent people who get caught up in that kind of mess because they profess the same basic faith as kooks like him do.