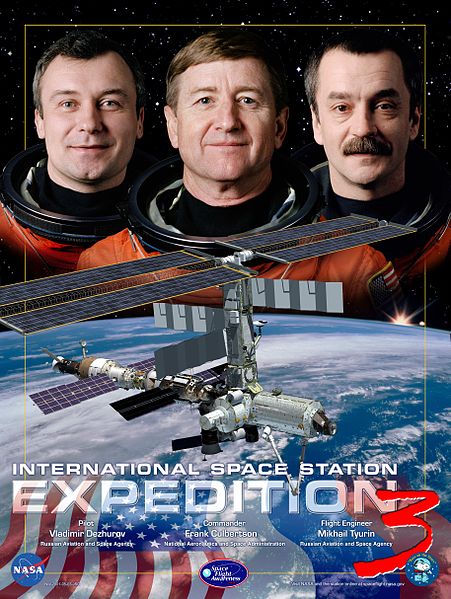 The Expedition 3 crew began their stay on the International Space Station by making preparations for the arrival of Progress-M 45 and departure of Progress-MI 6. They also hooked up EXPRESS Rack 4, which contained new biotechnology-related experiments that included the Dynamically Controlled Protein Crystal Growth (DCPCG) to study the growth of biological crystals. When Progress-MI 6 departed and Progress-M 45 arrived, the crew spent the next week unloading and logging cargo along with routine maintenance and housekeeping duties. 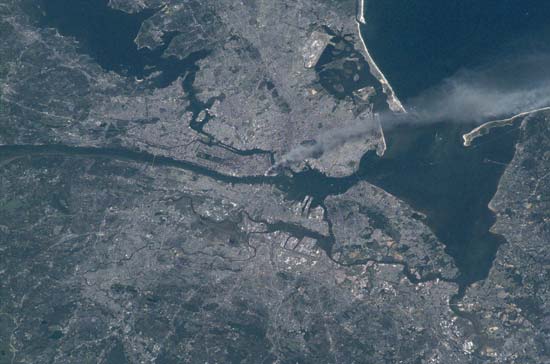 The smoke from the 9/11 attacks, as captured by Expedition 3. Image credit Encyclopedia Brittanica

September 10, 2001, was another routine day on the International Space Station. The crew recorded H-Reflex results for a study of changes to the spinal cord in weightlessness. One of the two photon-counting modules in the EXPPCS experiment malfunctioned but controllers on the ground decided that the remaining module was still sufficient to let the experiment continue operation. The next morning, the crew was informed of the terrorist attacks of September 11, 2001, and got pictures and video of the smoke plumes from the destroyed World Trade Center. NASA facilities were temporarily closed out of concern that they might be targeted, and then reopened the next day. Culbertson expressed his condolences to the families of the victims and his horror at the brazen attacks in an email and comments to Houston. He later learned that the captain of the airliner that slammed into the Pentagon was an old classmate and commented, “Tears don’t flow the same in space.”

Work Continues on the ISS 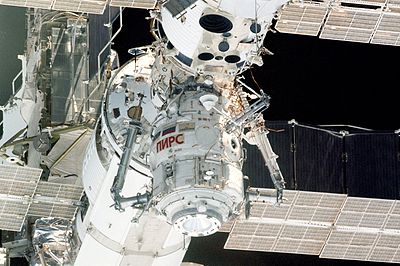 On the ground, work on new modules for the ISS was facing the usual delays and cost overruns and some within NASA worried that the space station would never develop the capacity to support a six-person crew. Some blamed mismanagement of NASA’s resources and last-minute redesigns. In the meantime, Russia was able to deliver its latest major contribution, the Docking Compartment Module One, called “Pirs,” with a launch on September 14, 2001. Pirs would provide an updated docking system and an airlock for spacewalkers wearing Russian spacesuits. It docked two days later and Culbertson reported, “We felt that!” as the probe connected with a drogue on Zvezda’s nadir port. The Russian Kurs antenna system and the docking probe was detached for reuse. The Expedition 3 crew updated hardware and software to control the new system. With two Russian docking systems, future expeditions would not have to move the Soyuz to accommodate Progress shipments. 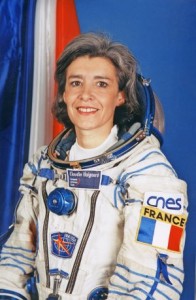 Russia also launched Soyuz-TMA 33 with Commander Viktor Afansayev, Flight Engineer Konstantin Kozeyev and Researcher Claudie Haignere. Haignere had previously served on Mir and was now a French astronaut working with the European Space Agency. The main purpose of the flight was to replace Soyuz-TMA 32, which the visitors returned in. Two days later, on November 2, 2001, the ISS observed another milestone, having been occupied for a full year.

On November 12, Culbertson and Dezhurov made an EVA to finalize installation for Pirs. They erected an antenna to assist docking, inspected a part of Zvezda’s solar arrays that hadn’t unfolded, and simulated using the Strela to transport cargo.

NASA administrator Dan Goldin announced his resignation effective November 17, 2001, and was replaced by Sean O’Keefe. One of O’Keefe’s first tasks was to explain to an unhappy European Space Agency why the US Habitation Module and X-38 had been canceled. This put a dampener on plans to increase the size of the Expedition crews and the amount of scientific work that could be done on the International Space Station. O’Keefe ultimately worked out a deal with the ESA that included extra sleeping quarters and life support equipment on the Italian-built Node 3.

The launch of STS-108 was delayed due to difficulties with the docking of Progress-M1 7, and again by bad weather at Cape Canaveral. Fortunately, the Expedition 3 crew was able to solve the problem with a spacewalk to remove debris that had gotten in the way. Expedition 3 began preparations for the arrival of STS-108, which was bringing up Expedition 4.

The commander of Expedition 3 still gives talks around the country and, at last check, was senior vice president for Orbital Sciences Corporation. Here, he talks about his experiences as an astronaut, including his reactions to seeing the 9/11 attacks from 250 miles up.