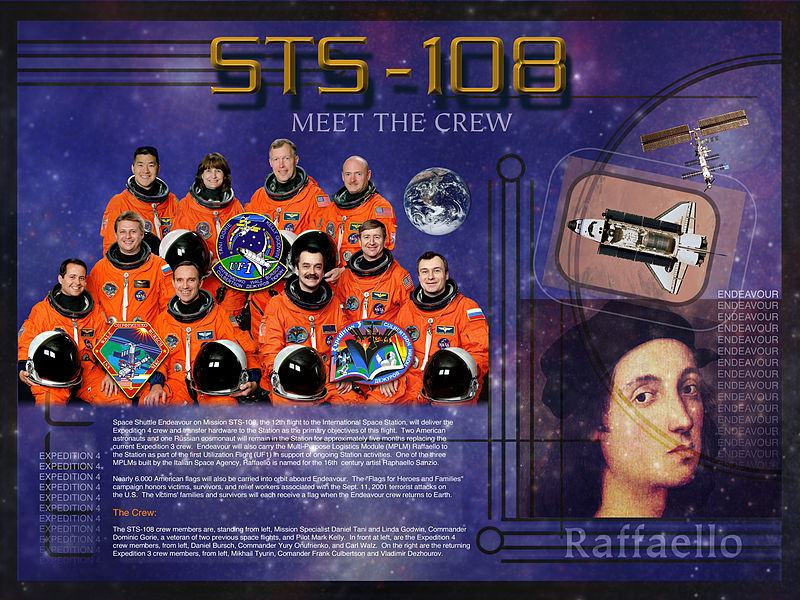 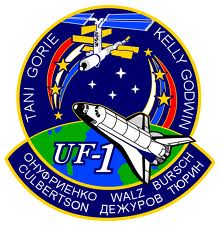 The STS-108 mission finally got off the ground on December 5, 2001. The crew included Mission Commander Dominic Gorie, Pilot Mark Kelly, and Mission Specialists Linda Godwin and Daniel Tani. The main purpose was to deliver Expedition 4, which would be commanded by Yuri Onufrienko of Russia and also included Daniel Bursch and Carl Walz as flight engineers. The Endeavour also carried the “Raffaello” MPLM with three tons of cargo and two shuttle-based experiments, the Capillary Pumped Loop Experiment, which tested a multiple evaporator capillary pumped loop system, and the Prototype Synchrotron Radiation Detector for measuring cosmic rays.

On December 7, the Endeavour rendezvoused and docked with the International Space Station. The Expedition 4 seats on the Endeavour were swapped with the Expedition 3 seats on the Soyuz and the two station crews began the process of discussing the condition of the International Space Station. Bursch commented that he had heard from Expedition 2’s Jim Voss that this mostly consisted of taking notes of anything on the station that was different from what the crew had expected, anything that had changed during the previous Expedition and any questions that the new Expedition had. Expedition 3’s Frank Culbertson had the unique experience of being the only American in orbit at the time of the 9/11 attacks and had heard that the United States had changed. Even so, he told the Endeavour as it approached, “It will be real nice to see you guys.” 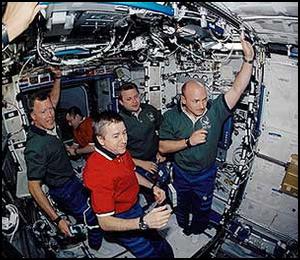 The next day, Mark Kelly used Endeavour’s RMS to transfer Raffaello from Endeavour’s bay to its dock on Unity. Carl Walz and Linda Godwin took charge of transferring cargo from Raffaello to the space station while Culbertson’s crew packed boxes with items to return to Earth on Raffaello. Walz remembered it as a complex choreography of boxes moving back and forth as the loadmasters kept track of which cargo stayed and what would go back with the Endeavour. Most of December 8 and 9 were spent unloading and reloading Rafaello, Expedition crew briefings, and preparations for an EVA scheduled for December 10. When the Endeavour crew retreated for the night on December 9, the Expedition 4 crew spent their first night alone on the International Space Station. 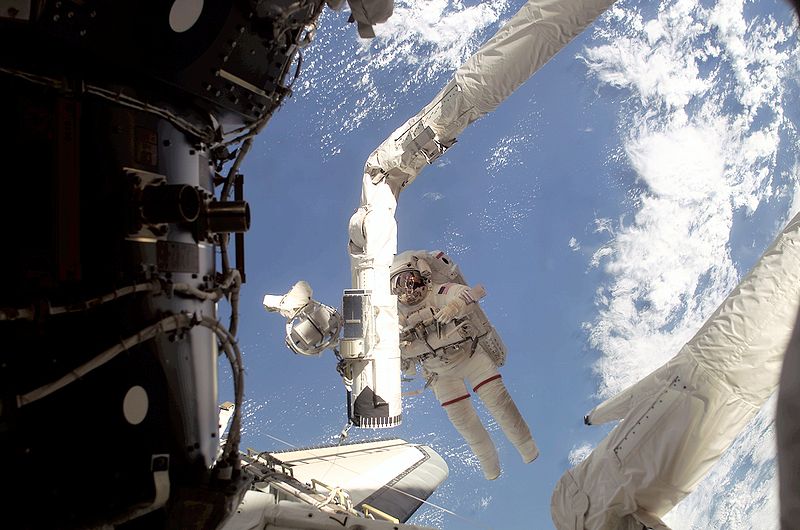 December 10 featured a spacewalk by Linda Godwin and Daniel Tani. As they exited through Endeavour’s airlock, they paused to admire the view of Earth. The International Space Station was just going over Houston and Godwin picked out a few landmarks. Their first task was to spread thermal blankets over motors in the P-6 Beta Gimbal Assembly, which was expanding and contracting with each orbit and drawing more power than expected. People on the ground worried that the gimbal assembly would eventually stall in the wrong position and leave the solar panels in a position where they couldn’t produce power for the space station. On the way back from installing the blankets, they retrieved an antenna cover that had been left in a storage bin during a previous EVA to be returned to Earth. They also mounted two switches on the station’s exterior and recovered some tools to be used on EVAs on future shuttle missions.

December 11 was marked with remembrances of the 3-month anniversary of the 9/11 attacks. The Endeavour had brought along flags that would later be distributed to the victims’ families. The Russians and Americans remembered the event by playing their national anthems in their control centers and on the Endeavour and International Space Station and the astronauts expressed their thoughts about the attacks.

The Endeavour crew was informed that their mission would be extended by one day to assist with routine maintenance that included replacing parts on the treadmill and a faulty compressor in one of Zvezda’s air conditioning units. Endeavour’s engines boosted the International Space Station’s orbit to avoid a Russian rocket’s upper stage from the 1970s. The crews also finished up cargo transfers and briefings. Culbertson ceremoniously handed over command to Onufrienko and presented the Expedition 4 crew with a Christmas tree, candy canes and small silver pins. The hatches closed for the final time on December 15th. The Endeavour retrieved Raffaello and, as Endeavour left the space station, Culbertson radioed back to Houston, “It feels wonderful to be heading home.”