Does the hot dog qualify as a sandwich? Some people say that, if you can put it between two pieces of bread or in a bun, it qualifies as sandwich material – maybe more so than sloppy joe, which has a tendency to fall out of the bread or bun and on the plate or on your clothes if you’re not careful. Others say that it’s not a sandwich and those who call it such are just plain too lazy to make a proper Bumstead. It’s right up there with the debate on which kind of wine goes best with chocolate bars when it comes to popular food debates on the Internet.

Most people don’t seem to know that the debate may have already been settled by this exchange between the Apollo 13 crew and the ground: 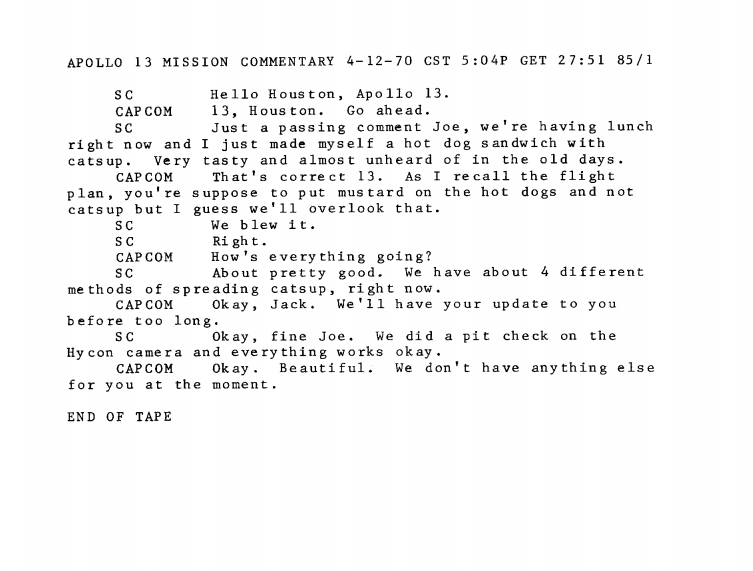 This exchange can be found on Page 115 of a 930-page transcription in NASA’s Archives. Three things to note here:

This contradicts a 2015 ruling made by the National Hot Dog and Sausage Council, which stated that the hot dog is not the same thing as a sandwich. This comes alongside their pronouncements regarding hot dog etiquette listed in the video below, which amount to: “Don’t try to pretend that hot dogs are in any way fine dining, but do remember that the only standard of good manners and cleanliness that applies is that the entire hot dog, including bun, must be eaten.” That goes for the crumbs, too, especially if you happen to be in a zero G environment that contains no ants to clean up your mess.

It’s safe to assume that the Apollo 13 crew would not have known or cared about the existence of this authority on all things related to hot dogs and sausages at the time, especially considering the circumstances. Anyway, the SC (presumably “Spacecraft Commander,” James Lovell) did admit, “We blew it,” when Capcom reminded them that mustard is acceptable on a hot dog, but ketchup (“Catsup??”) isn’t. Perhaps this etiquette rule simply slipped the crew’s mind at the time. Anyway, they probably weren’t thinking about how versatile the hot dog can be. So they could be excused for calling the hot dog a sandwich at a time when they probably had other things on their mind.