HOUSTON, Oct. 23, 2018 – The nonprofit Space Center Houston raised $300,000 for its fall luncheon To the Moon and Beyond honoring legendary flight director Gene Kranz and supporting the campaign to restore Historic Mission Control Tuesday at the Marriott Marquis Houston. Led by chairs Gwen Griffin and Al Saylor and co-chairs Susie and Pat Cunningham, the star-studded fundraiser celebrated Kranz for his extraordinary contributions to human space exploration and his leadership in the Historic Mission Control restoration project at NASA Johnson Space Center.

“We had the pleasure of honoring Gene for his steadfast commitment to furthering humanity and serving as an influential advocate for science, technology, engineering and math,” said William T. Harris, president and CEO of the science and space exploration learning center. “Heartfelt thanks to Gene and our generous sponsors and donors whose contributions are helping to restore a National Historic Landmark and provide exceptional learning experiences to get people on the STEM pathway.” 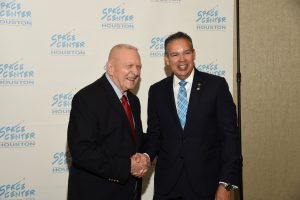 The luncheon celebrated the history and future of human space exploration. Proceeds from the luncheon benefited Space Center Houston’s $5 million campaign, On a Mission, in support of the restoration of NASA Johnson Space Center’s historic Mission Operations Control Room. The restoration will accurately portray how the area looked the moment the Moon landing took place on July 20, 1969.

In total, $5 million is needed to restore and sustain this iconic control room often referred to as a “cathedral of engineering.” A longtime supporter of the nonprofit, the city of Webster gave Space Center Houston the lead gift of $3.5 million toward the $5 million restoration campaign goal.

Astronauts Bill Anders and Walt Cunningham, Apollo flight directors Milton Windler and Gerry Griffin joined a community of more than 400 guests to honor a legend and support the restoration of Historic Mission Control. The crowd was captivated by a surprise video message from the International Space Station crew honoring Kranz and his legacy furthering human space exploration. City of Houston Mayor Sylvester Turner was among the distinguished guests. Mayor Turner honored Kranz, a resident of Dickenson, Texas, by proclaiming Oct. 23 “Gene Kranz Day,” adding the city and the world are appreciative of his leadership and commitment to inspiring the next generation of explorers.

This year’s luncheon was the kickoff of the nonprofit science and space exploration learning center’s countdown to the 50th anniversary of the Apollo 11 lunar landing next year. Through July of 2019, Space Center Houston is bringing the legacy of the Apollo era to life.

The Manned Space Flight Education Foundation is a 501(c)(3) nonprofit science and space exploration learning center with extensive educational programs. Space Center Houston is the cornerstone of its mission to inspire all generations through the wonders of space exploration. The center draws 1 million visitors annually, was named “the Best Museum in Texas” by USA Today and generates a $73 million annual economic impact in the greater Houston area. Space Center Houston is a Smithsonian Affiliate, the Official Visitor Center of NASA Johnson Space Center and a Certified Autism Center. More than 250,000 teachers and students from around the world visit the center annually to experience our educational space museum with more than 400 things to see and do. For more information, go to www.spacecenter.org.