A Demonstration of Spider Solitaire

How To Play Spider Solitaire 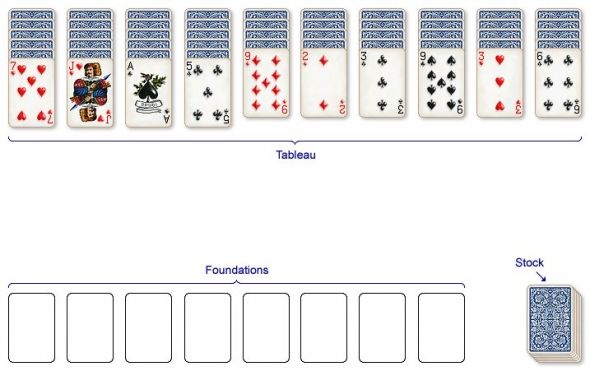 Objective: Form eight descending sequences of cards from King to Ace. Each sequence should contain only one suit of cards. When each sequence is formed, it should be removed from the column it sits on and placed on one of the foundation columns.

Rules: All of the actual play takes place on the tableau columns. You can move any exposed card to another column if it forms a descending sequence, e.g., the 2 of hearts can be moved to the 3 of spades. You can move entire sequences of cards only if every card in the sequence is in the same suit, e.g., the 2, 3 and 4 of spades can be moved as a sequence but not the 2 Spades, 3 Hearts and 4 Spades. If you run out of plays, you can deal one card to each of the columns. This can only be done if there are cards on each of the columns. If you have empty columns, you may have to break up a sequence.

How To Play Klondike Solitaire 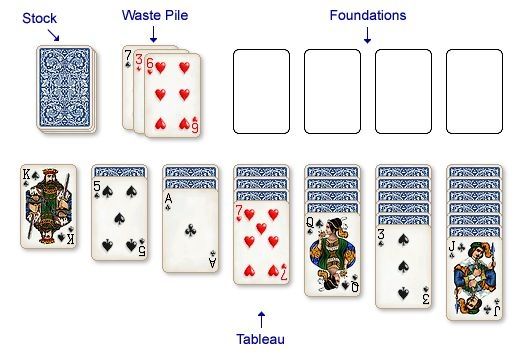 What you’ll need: One full 52-card deck of cards with Jokers removed.

Objective: Fill the foundation columns with 4 single-suit sequences of cards, Ace to King.

Start Play by moving any face-up Aces to your foundation columns and building your foundation sequences. You can also move cards to another column if it forms a descending sequence of alternating colors. For example, you can move a red Three to a black 4 or a black Queen to a red King. If you have an empty column, you can move a King or a descending sequence starting with King into the slot. Turn over any exposed face-down cards. When available moves have been exhausted, deal the top three cards on your stock pile face up without interrupting the order. The top card is always available for play, either to one of the descending sequences on your tableau columns or to one of the foundation columns. Continue play until you win or run out of available moves.

All The Solitaire Games You’ll Ever Need