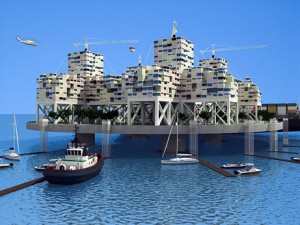 I’ve been hearing a lot about the Seasteading movement lately. These are people who want to build cities out in the ocean beyond any national border. It’s a good place for social experimentation without much interference from any outside government. If a Seastead fails, it won’t be because of high taxes or insane levels of regulation. It’ll be because the people involved learned the hard way that seasteading isn’t as easy as it looks, or else because they chose the wrong social model and human factors caused the whole thing to tank. In any case, they’ll be hurting no one but themselves if they decide they’ve had enough and slink back to shore. You could argue that this is more than the Martian colonists are going to have, and I won’t argue if seasteading is what people who like the idea of total freedom with no dependence on a government that is disconnected from the lives of average citizens decide to do. I consider seasteading as a kind of miniature form of Martian colonization in which the people involved can still get a bailout if they run into problems they can’t or won’t solve on their own.

The thing to remember with Libertarian movements like seasteading is that minimal government will not mean that there will be no consequences for mistakes. This was pointed out in stark form in a recent issue of Analog Magazine, in which a fictional seastead was rocked by an artificial virus that escaped the laboratory. This is a situation in which justice can be much more swift than it is in America if only because people don’t have to be quite so concerned with technicalities of the sort that often cause the guilty party to get off with no consequences in America.

Even considering that element, seasteading may be a safer way to conduct social experiments than the Martian environment can provide. As an Aspiring Martian myself, I often get impatient with people who want to use Mars as a way to create a whole new civilization with none of the elements that get blamed for social ills on Earth. While I’ll agree that Mars is no place to be exporting generational grudges, it is also no place to be conducting experiments in a way that might get in the way of simple survival. Nobody is going to bail us out if we chose the wrong social model and now the equipment is failing because everybody assumed that somebody else would do the work of maintaining it. We’re going to be building our own society, but we’re going to do it in a way that allows us to survive and possibly even thrive in the harsh Martian environment. Seasteading doesn’t necessarily need that particular element because, if the entire seastead blows up because an inebriated member of that particular settlement put a bullet in the wrong place, the survivors can simply straggle back to the mainland.

Utopian societies rarely work out in the long run due to the vagaries of human nature. Even in a community in which everybody has a garden that produces enough food to feed his family and there are no guns, somebody might try to pick a fistfight with his neighbor because he thinks his neighbor stole his tomatoes. The lack of anything resembling a military will inevitably lead to the Utopia being overrun by its less-enlightened neighbors.However, I’m not about to try people from trying to form one as long as it’s understood that they do it at their own risk. Good luck with your seastead, but don’t expect me to join if I don’t think your particular model is reasonable.

The colonization of Mars can work on the same principle as these seasteads. Mars One is forming an independent beachhead on another world meant to establish that people can live on Mars. This is the experiment and throwing variables like somebody’s wish to build a Utopian society right from the start into the works will inevitably ruin the whole thing. Of course, I’m in favor of other people planting colonies just far enough away that we aren’t stepping on each other’s toes all the time. A patchwork of Martian colonies, each pretty much developing its own way of doing things, will at least give people some choices if they decide they don’t like the prevailing attitudes in one colony and want to move to another. Some of these might be the same kind of people who now want to form seasteads for the sake of enough freedom that their ideas aren’t being stifled. Of course, some people won’t like all the dangers, the work, and the isolation that will go into colonizing another planet. These are the people who might quit in a huff because they were expected to actually make a contribution to their new society. On a seastead, they’ll at least have that option. On Mars, I won’t say that quitters will never be able to go back to Earth at some point in the future, but it would be fair to say that it’s complicated. This is one major reason that I’ve wanted to discourage the Utopian types from getting involved with Mars One. If you decide that Utopia thing isn’t working out for you, there’s no going back.

So do the seastead if you feel the need to carry out a socioeconomic experiment. It’s less risky than colonizing Mars and you aren’t bothering your neighbors by trying to convince them that your ideas are better than theirs when they’re probably figuring out how to make a new society work too. It can be done if you know the right people. The Seasteading Institute is a good resource to check out for starters. They’re actually figuring out the science and technology that will be needed to make a seastead work and they’re out to help people who just want a little freedom to test their own ideas.