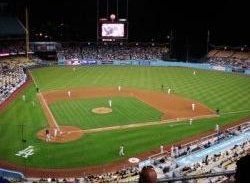 So you’re a total baseball fan. You can rattle off the stats of your favorite players for about as long as they’ve been playing baseball. You wish there was some way to play back some of your favorite moments, including that amazing catch by Willie Mays that they haven’t quit talking about yet. Fortunately for baseball fans everywhere, there’s always Youtube for playing back those moments as many times as we like.

What You Can See Here!

…Does whatever a spider can.

Japanese astronaut Satoshi Furukawa plays baseball against himself on the International Space Station.

Awesome Catch By A Fan

Sometimes it’s not the players who make a great catch. Check out this, um, “catch” by a Japanese baseball fan.

And Just For Grins…

A clip of some baseball bloopers.

Out of the Park

Test your baseball skills with two versions of this best-selling baseball video game.