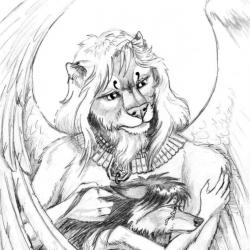 “We are the Mighty Grebsas,
we shall rule an empire
With the thunder of our roaring voice
to pass our judgment dire.
With our strong swift wings and sharpened claws
to enforce our will of iron,
May we ever prevail!”

The Lords of the Grebsa Network were caught completely off guard. The alien Veroshi swooped into Earth with a compulsion to worship the Grebsas as gods that had been engineered by a Prophet they never knew. It was enough to bring a charging Grebsa to a sudden stop. The Veroshi are just beginning to settle into the city built for them by the reluctant gods when an elderly member of the Guardian Faction collapses while protecting abandoned Veroshi puppies in a blizzard. The Mind-Priestesses insist that these puppies are the children of a Grebsa. That leads to snorts of “Impossible!” from the Grebsas, but as events unfold, they begin to wonder exactly how unlikely it is.

In the days following our Landing, we had much work to do: planting the fields which the gods set aside for our use, becoming familiar with our Holy City and arranging matters to our liking. So, too, did the gods themselves, building the Spa by our request. …
In time, we harvested the first crop and praised the gods, for we had enough to last for two years with care. It is well that we did, for, within weeks, the first Snow came.
From the Journal of High Priestess Rossa

How Cute Are They?

Read and find out!

“They came out of the darkness
with a tune to make us strong.
With good intent they came to us
though the journey was long.
By our Agreement with them
we will keep their song
Joyful and care free!”

Geralt Half-Face: An aging Guardian who lost part of his face in combat. He puts up with no threats to the Veroshi he has been assigned to protect.

Ruyana: A former outcast and Geralt’s Special One, Ruyana is the only survivor of a set of triplets and a Priestess in training.

Ariana: The Commandrix of the Enforcers and one of the oldest Grebsas, he may remember the beginning of the Grebsa Empire. Afraid of harming the Veroshi by accident or his own violent nature, he avoids Veroshi City as much as possible.

Era: The intelligent Commandrix of the Scientists, he discovers a secret that may lead to a new Faction of the Grebsa Network. Tranna occasionally harasses him for not having a lot of common sense.

The Snow Puppies: A mysterious set of Veroshi newborns who were left in a blizzard.

“Great! You really have a way with words. Very descriptive, but not bogged down with trying to describe too much. It was easy and enjoyable to read! Keep up the great work!”

The Grebsa Network: Snow Puppies is Available In Paperback and Kindle Edition on Amazon