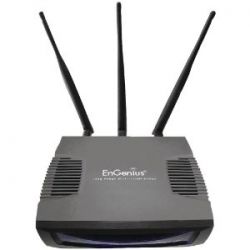 Have you finally gotten sick of sharing the household computer that’s hooked up to your Internet? Or are you thinking of upgrading your wireless router to something a little more modern? If so, you’re probably wondering where you can get a wireless router that actually works without dropping a ton of packets or going haywire every time the weather gets bad. Just a hint: Wal-Mart isn’t the place to look. You want to shop someplace that actually knows a good router when they see one and can point you in the right direction. The price should be decent and it should come from a manufacturer that has earned a reputation for making good routers. To get you started, here’s a list of ten of the best routers for your consideration.

So you lost the instruction manual for getting into the firmware for your wireless router. What do you do? With the Securifi Almond Touch Screen Wireless N Router, it’s not so much of an issue if you know a little bit about routers and can run a touchscreen. That’s right, the Securifi Almond Wireless N Router is the first functional wireless router that can be programmed with a touchscreen. Use it as a primary router or range extender and link to it with most major Operating Systems like Windows, Mac, Linux, iOS and Android. If you have no handy geek in your family, this router helps to eliminate the headache of setting one up with a series of wizards for initial setup and setting a password and they were impressed by the speed. Can you spot the wireless router at your office? You haven’t figured it out yet, but there’s something funny-looking about that smoke detector. If it isn’t an actual, functioning smoke detector, there’s a good chance that it might be a wireless router like the Ubiquiti Networks UniFi AP Enterprise WiFi System. It uses 802.11N MIMO software for speeds up to 300 Mbps with a range up to 400 feet. It’s perfect for scalable networks that expand over time and, if you start to get calls about the wireless hotspot being out, it’s easy to tell if this router is offline just by glancing at the LED ring. Look for Long Range and Outdoor versions of this for extending your wireless network. One IT professional recommended checking your firewall if you have trouble connecting this to your office network. Ubiquiti is one of those lesser-known companies that know that they have to build better products to compete with the big boys like Cisco and it shows. Looks funky, doesn’t it? But this range extender from Asus can help you reach those areas in your house or office where you’ve had a little trouble picking up the wireless signal. You may want to get your family geek to set this one up for you because the interface can be tricky, but otherwise, this is a good extender to have in your house for those times when you want to get a little privacy in a corner of your house while using the Internet. This pricey yet worth it wireless router is a good pick for businesses that have gotten sick of outside people leaching off of their wireless or possibly using it as a portal to attack their network. It includes a firewall, compatibility with IEEE 802.11a/b/g/n standards, and three years of LiveSecurity service to help coordinate with your networking expert to keep your wireless router secure.

The Ubiquiti PicoStation 802.11g/n High Power Access Point features 600 mW of power with Pico firmware support and AirOS by Ubiquiti Networks. Reviewers like the automatic channel surfing feature for areas that have a lot of wireless networks in the vicinity. It makes a difference because two wireless access points on the same channel can interfere with each other if they’re in close proximity. Setup is a little challenging but, once done right, it works very well. This PicoStation is very powerful for its size and makes a good addition to a network as a standalone access point or as a wireless bridge. A tall Roomba? Think again. This is the D-Link Wireless AC1000 Dual-Band Cloud Router, a device that looks like a favorite real-life home robot even though it won’t sweep your floor and can be easily set up using your preferred web browser and your choice of PC or Mac. It can handle being used in a large home with a reliable connection that pushes the boundaries of 2.4-GHz and 5.0-GHz dual-band technology.

The D-Link Systems DIR-605L Wireless-N300 Cloud Router features cloud access with a free Smart Phone app you can use to monitor your network remotely and enhanced security features with remote threat monitoring. With these features, you can shut down on those annoying neighbor kids who insist on playing their streaming games on your router, which can bog down your network, and also avoid a legal flap by keeping out that old creep who downloads a lot of porn. One IT professional commented that a lot of negative reviews could be solved if customers took the time to learn something about wireless routers and how to set them up, liked the idea of blocking specific devices that have been connecting to your router without your permission and also liked the wizard that helps make setup easy for people who don’t have a lot of networking experience. The TP-LINK TL-WDR4300 450Mbps Router uses 2.4-GHz and 5.0 GHz Dual-Band capability for a boost in speed that makes it a good upgrade if you’ve been unsatisfied with your old router. Despite one complaint that it was difficult to find an ideal place to put the router (and, yes, walls and other solid, opaque obstacles can interfere with wireless capability no matter which one you choose), it seems to function rather well once you get it placed in a good spot. This router is compatible with the latest wireless networking standard, IEEE 802.11ac, for an impressive boost in range and speed along with backwards compatibility with 802.11a/b/g/n. It is capable of prioritizing the delivery of data packets to ensure that your streaming video runs smoothly even when somebody else is emailing a large document to his boss. It’s easy to set up and provides better connectivity than many home routers. A solid device like this one is one reason that LinkSys has become one of only a few go-to manufacturers for people who want reliable wireless connectivity at home. With a USB port for wirelessly sharing media and an impressive Dual-Band capability, this selection from Netgear is a good pick for people who have wanted to share their presentations and videos on multiple devices on the fly without the hassle of uploading it someplace. The media sharing does have some limitations and can’t actually store the files, but it’s pretty cool for just being a wireless router and not a full-blown file server. The router serves its primary purpose of providing connectivity very well though.