So some of us are already a little nuts, as seen in this Mars One application video. Are we going to become even more nuts?

You might have looked askance at some of the psychological aspects of the Mars One plan. It’s pretty obvious that the successful Mars One candidates are basically volunteering to spend the rest of their lives cooped up with a small group of people, with new faces arriving every two years until you have a population that equals the number of employees in a respectable-sized local business if everything goes as planned. That sounds like a recipe for mental illness when you think about the idea that humans evolved to be social animals.

I’ve heard the cases, too. Two men in an isolation study get into a fistfight. A cosmonaut on a long-duration mission becomes hostile and another doesn’t talk to his commander. Obviously, the loneliness and the stress of being far away from everything that’s familiar has gotten to them. We’re going to have to deal with the same thing when we get to Mars.

However, we can plan for it. Part of the selection and training process will involve seeing how we deal with isolation and being crammed into small spaces with three other candidates. Some of us won’t be able to take it and will effectively eliminate themselves when they start tearing things off the walls. I’ll probably be the one who ducks when somebody starts throwing punches and I am thinking that those cameras will be very useful in cases like this (“But he threw the pillow first!”). It will be very useful to have procedures in place for when one of us makes like Animal from the Muppets.

But let’s not let it get to that point, guys. Theoretically, the selection process will eliminate both the person who will crack under pressure and run out into the Martian landscape in his underwear, and the one who takes pleasure in goading people until they reach that point. More practically, I don’t expect to actually use a beaning pillow very often, but neither will I be very impressed by the fact that you have a headache if you are going to take it out on me. As long as we all acknowledge that we are human beings who are capable of feeling frustrated or just plain grouchy at times and are willing to hash out our problems while keeping things civil, I doubt that we will have much of a problem. 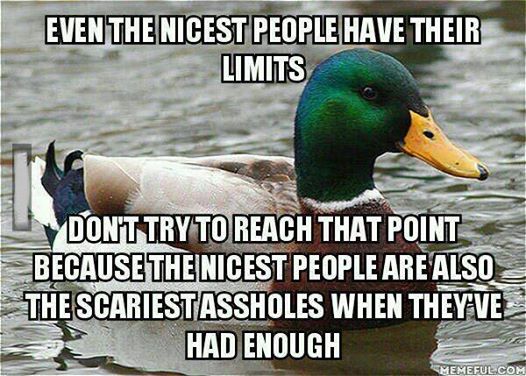 Image credit: Karma: what goes around comes around by PMC

Anyway, I’ve noticed that some people are just more social than others. I’ve had whole weeks when I was just home alone, taking care of some items on my to-do list without anybody around to get in my way or interrupt me with nonessentials. Spending my whole life cooped up and seeing the same few faces every day would not be much of a culture shock for me – though hopefully the faces of the Mars One settlers will be a little bit prettier. Such a thing would probably drive my sister nuts because she’s a chronic social butterfly who complains quite loudly if she gets snowed in for a couple of days.

In fact, I kind of like the way Ernest Shackleton looked for his crew when he went out to explore the South Pole in the early 1900s. His exact advertisement read:

Obviously, he cared more about finding people who wouldn’t let themselves be intimidated by hardship than he did about finding people who were socially adapted by the standards of his time. He probably didn’t find the ones who had the same high-falutin’ good manners as the social elite, but he knew a little something about team-building and succeeded where other people had failed.

I will be thrilled if Mars One takes the same attitude and chooses people who care more about making the colony a success than about whether their crewmates say “Bless you” when they sneeze. Because of the multicultural thing, it might be a little tricky for me to remember that a gesture I take for granted might be considered rude in a country halfway around the world. But I do the best I can and I hope I don’t get clobbered with a pillow for doing or saying something that another person might consider rude.

Do you have a good idea of whatever gets you all worked up? Animal’s trigger is, apparently, drums if you go by this video:

But, really, “In control” is a good thing. It means you are introspective enough to realize that you might have a few triggers of your own. Then you can do something about it before it becomes a problem that can cause serious problems for the team. Actually, I hope that the Mars One selection team doesn’t choose the most socially adapted candidates available. It would be interesting to see an experiment in which an extrovert and an introvert are each confined to their own cabins with no other company and no way to communicate with the outside world for an entire winter, and we’ll see who emerges sane. There might not be much difference between staring at the four walls of a cabin that has been buried in snow and staring into the infinite universe when it comes to forcing people to consider themselves and their place in the grand scheme of things. Not everybody can do that, and maybe that causes a lot of the mental issues that psychologists have noticed in isolation tests.