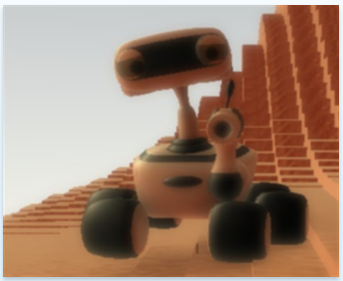 Is this what the first hot toy on Mars is going to look like? Image credit: The Seattle Times

So this is one topic that goes around and around a lot on public forums that have been watching Mars One and similar ventures. If there is any topic that will test the feasibility of a Martian colony in many people’s minds, it’s this one: Will it ever be feasible to bring a new human life from conception to adulthood on Mars? It’s almost like they expect those of us who actually reach the Red Planet with the Mars One plan to be testing that concept in a few years.

Having any child within the confines of the Mars One settlement would be a very poor idea. In fact, I’ve used the word colonize to describe what we are trying to do here, but perhaps settling would be a better word. Colonize seems to imply that we will have a thriving community that includes family units and children. Settling implies that the successful candidates will be the ones who can hack going off into the unknown alone, or close enough to alone that it’s obvious that we aren’t social butterflies, with a spouse and children being optional. Having children should be so far down on our priority list that we will all be surprised if we find a squawling newborn in the women’s quarters.

Maybe such an event would be good for ratings for a while, but it wouldn’t be very good for the settlement. The baby will be very easy to feed at first, but he will still use up oxygen and water something fierce and also take time out of the workday for care. We will be improvising a diaper with a cleaning cloth and arguing about whose turn it is to clean up the puke on top of the daily stresses of caring for the plants in the hydroponics unit, tracking down a glitch with the solar array and making sure the oxygen generator is up to snuff. 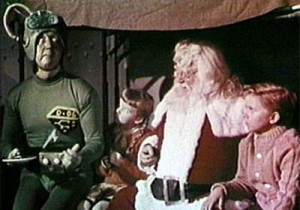 Let’s not get so desperate over the children on Mars issue that we’re going to make a try at kidnapping Santa Claus. You know you’ve made it as a B movie when you’re getting lampooned by “Mystery Science Theater 3000”. Image Credit Signal Bleed

What do we do when the child is old enough to walk? It isn’t going to know not to open the airlock or pull up the tomato plants. Somebody better be willing to chase after the kid and give a good spanking when necessary, and I don’t care what they say about spanking not being good for kids. It’s better than let the child kill us all from ignorant mischief. If the kid just doesn’t get it, what are we going to do? Sacrifice an entire habitat just to keep the little imp contained? The same viewers who were going, “Awww,” when the little one was born will be blistering us for being inhuman. It’s not about being inhuman. It’s about survival. It means we found out the hard way that having the child in the first place wasn’t such a good idea.

Anyway, Mars One has bent on one point that the critics had. While they don’t outright say that having children is forbidden, they acknowledge that there is no science on the development of a human fetus outside of the relatively friendly Earth environment. Conceive a child on the way to Mars, and it could well be born with a foot growing out of its head or some weirdness like that. If an accident happens on Mars, well, the lack of a large moon, the 0.376 G (roughly 1/3 the gravity of Earth), and the fact that the child will be stuck indoors all the time without even an EVA suit that lets it out to play in the yard could well affect the little one’s development in a bad way. You remember what it was like to be stuck inside on a rainy day as a child. Imagine being a kid on Mars and the adults telling you that you can’t play outside because the atmosphere is so thin, while they are all too busy with their very important work to pay much attention to a bored kid. Yeah, he would be almost as bad as a bored baby goat, but some of the sympathy starts to go to the child.

So, obviously, starting a family on Mars will have to wait until we know more about living on the Red Planet. Nobody’s ever done it before, so not even the smartest expert on the subject can claim to know anything for certain. Mars is hospitable enough that it becomes a little difficult to justify having children on either ethical or practical grounds. While we don’t have to wait to start the process of settling Mars, having children should wait until we have a thriving colony with potential parents who have the time and resources it takes to raise a child.

In case truly awful movies appeal to you…

Yep, Santa Claus Conquers the Martians is available on Blu-Ray!

…And Robert Zubrin Weighs In.

Among other things, he talks about finding a loved one and raising kids in a not-so-distant future on Mars. So all hope is not lost.