Like most Mars One candidates who aren’t living in a bubble, I’ve heard the talk from people who think that we’re just throwing our lives away by volunteering for a one-way trip to Mars. Do we really value our time in this world that little? What if the rocket blows up with us on board or something happens that causes the artificial atmosphere in our settlement to escape? Why aren’t we satisfied with a nice, cozy life on Earth?

Well, I can’t claim to speak for all Mars One candidates, but I’m not too inclined to go out in a blaze of glory. I’ve taken a good hard look at the plan and I like what I see. They have a high-powered list of advisors, a list of aerospace contractors who actually know what they’re doing, and a concrete list of items to check off before they actually send people to Mars. I probably wouldn’t have applied if I didn’t think Mars One could actually pull this off. It’s not so much about dying on Mars as it is about living on Mars. 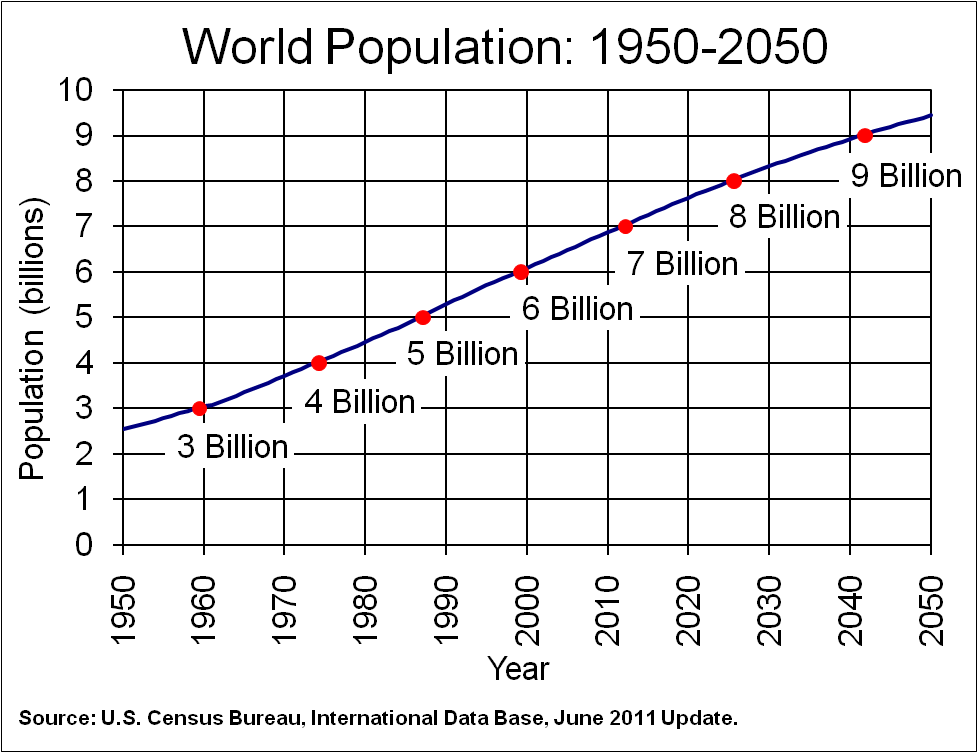 A projection of the world population through 2050. Image credit Census.gov

Maybe it’s more about human lives. Plural. Let’s face it, there’s more than 7 billion humans on this planet and a lot of us don’t exactly have what I would call a cozy life. And, before you get into the whole “Let’s dump space exploration so we can fix Earth’s problems” argument (which, to me, is just trolling), consider the fact that billions of dollars HAVE been spent trying to solve world hunger. Would it make more sense to have built self-sufficient colonies on other planets that can actually feed, cloth and house all of the colonists involved as long as they put an honest day’s work in? Or would you rather continue to put a growing strain on Earth’s resources in a futile attempt to feed everybody? Where is the value of human lives when people cannot move to where they can find life’s essentials in a way that lets them keep their dignity? Have we wasted those billions of dollars that could have been spent on ways to expand humanity’s scope and actually provide jobs?

In America, we’re used to the idea that all people are theoretically born equal even in the increasingly uncommon case that some racist jerk loudly disagrees with that single principle. In practice, I’ve read at least one story about somebody finding a newborn baby abandoned in a dumpster and rushing that little girl to the hospital. The one who cared enough to investigate those sounds coming from the dumpster was called a hero, but it’s fairly obvious that somebody didn’t value a new life enough to give the newborn a fair shot at making something of herself. It might be easy to sit back in your easy chair and talk about how the mother should have at least tried. It’s harder to be so high-minded when somebody is a single woman on food stamps, not mature enough to really make a good mother and not even sure who the father is. So that woman takes the easy way out. Where is the value of a human life in that situation?

So the human baby begins to grow. If the child is lucky, she will find an adoptive family who actually loves her and perhaps she is unaware that she was abandoned in such an undignified manner. She goes to a good school, perhaps a private prep school that is known for recognizing and developing the aptitudes of each individual student. She earns a scholarship at an Ivy League college and majors in one of the engineering fields and, for her doctorate, designs and tests new management software for a robotic arm. Then she lands a job at a major engineering firm and patents a few of her own inventions on the side. In the eyes of society, this lucky woman has more intrinsic worth than the poor woman who abandoned her. So our theoretical abandoned baby had the good fortune to be valued by somebody.

And what is the point behind our fictional happy ending? Well, to value a human life, there has to be an outside spectator measuring its worth. The woman who abandoned her baby would argue that the life of someone on food stamps is more valuable than a newborn who could become a world-class engineer if given a chance. But the one who found the abandoned little girl would argue that it’s a damned good thing he thought to lift the dumpster lid before she died of exposure. That means two very different valuations from two very different people.

Do I value my own life? Sure I do; I’m not exactly suicidal. However, I don’t mind putting my own life on the line for a principal like making Homo sapiens a multi-planet species. Like I said earlier, we are rapidly using up Earth’s resources while our population explodes. So it’s really about human lives instead of one individual life, see? What can we do to make the maximum amount of difference for the maximum amount of people if we know that we won’t entirely eliminate the ills of Earthbound societies?

First, we get the attention of the people who actually want to make a difference for many generations to come. Mars One did that by blasting to the world that they are looking for average people like you and me who think they have what it takes to colonize Mars. (That was a brilliant marketing move, by the way. So you think you have what it takes to make a one-way trip to Mars? Okay, prove it.)

Second, we get the attention of the general public who want something new and different on their television screens. Mars One intends to do exactly that and also raise the funds necessary to send people to Mars with a series of media events in which people can vote for a pool of already carefully selected candidates. The winners will represent humanity on the first-ever permanent settlement on another planet and hopefully inspire people who might have dreamed about improving their lives but didn’t actually think they could do it.

Third, we learn from the process and refine as necessary to actually make a difference. I might have volunteered for this, but I’m smart enough to know that forming a permanent and growing colony on Mars will mean a steep learning curve. There’s a thousand ways we could deep-six ourselves and it only takes one. However, whether we succeed or fail, we’ll have learned a little bit about what works and what doesn’t in the process of colonizing another planet. Then the ones who want to leave their old humdrum lives and don’t mind living the life of the rugged individualist can follow us and build a new life if they are willing to take any remaining risks. That’s something that can increase the value of the lives involved.