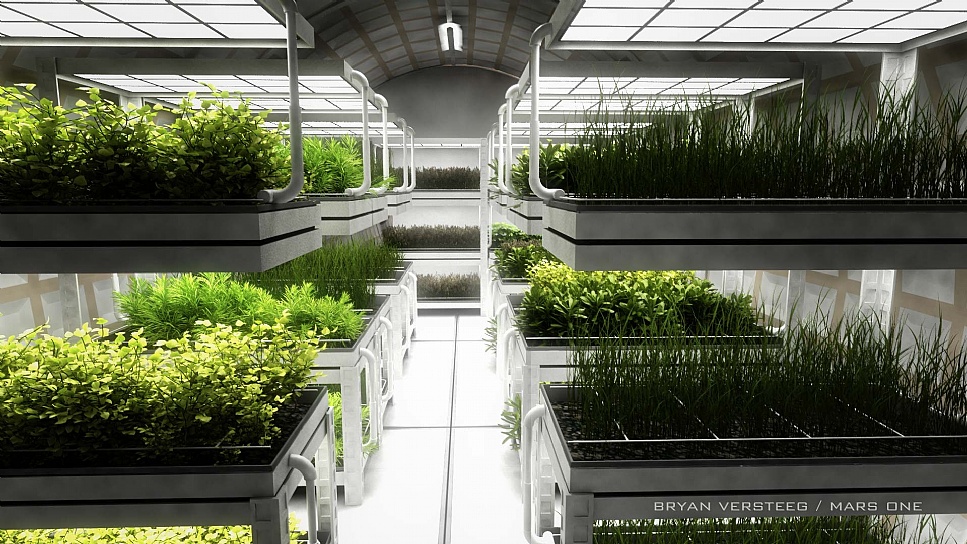 Will we produce the amount of food our Martian colony needs to survive? With a little planning that involves, a method for growing food indoors, proper training on how to recognize and solve potential problems with our crops and choosing the right kind of plants to grow, we should be able to produce as much food as we need in a limited space.

What Will We Eat On Mars?

According to the Mars One website, we will be using 50 square meters of space to grow food. That’s assuming nobody manages to smuggle along some extra seeds and supplies needed to stick a plant in a corner of a habitat so we can supplement what we grow in the official greenhouse. That idea seems to be a favorite with certain people in the Aspiring Martians Group. Favorite suggestions have included hemp plants (apparently the seeds are small enough to be easily hidden) and a banana plant (which has been called the Swiss army plant of the floral world).

A small greenhouse that can produce enough food for a crew of four (for starters) can seem like a real challenge unless you have the right kind of equipment on your side. It should be easy enough for people who maybe haven’t previously had a lot of experience with greenhouse experience to operate with some training. As of right this minute, I assume that most applicants can keep a potted plant alive and maybe have a reasonably sized garden if their living arrangements allow it. At least one has installed a miniature ecosystem and brags that the mosquito population has dropped because of the fish. However, the currently proposed hydroponics system is a little more technically involved than just sticking seeds in the ground. It will need systems to regulate the flow of water and nutrients, monitor the pH levels for each type of plant, and assist the crew in identifying difficulties with the system. (I include plants in “the system.” A computer-aided test might be able to tell the difference between blight on the tomatoes and the plants not getting enough nutrients.) PlantLab seems to have a pretty good system for growing food in a limited space.

The hydroponics system should also be fairly self-sufficient. Each design will have varying maintenance needs, so it will be a matter of knowing the pros and cons. The crew might not always have time for constant maintenance of such a system when they need to pay attention to the life support systems and maybe go on EVA to check on a misbehaving rover.

The greenhouse should also contain plants that can fill the nutritional needs of the crew over the long-term. Some of my favorite proposals include:

This is an incomplete list, of course. Asparagus and potatoes can also grow well in Martian soil without a lot of tinkering. But what about the nutrients you can’t get from plants?

Okay, we probably won’t have a lot of cute baby animals running around during our first years on Mars, but there are a few people who don’t want to give up their animal proteins for the sake of pioneering the future of mankind. Some animals that might be workable on Mars include:

So food shouldn’t be a problem on Mars as long as the systems that include living things are wisely chosen for maximum benefit and properly maintained by the well-trained crew.

While you’re waiting for your trip to Mars, you might want to get a start on learning about hydroponics with these books.

Stock Up on Hydroponics Supplies on eBay