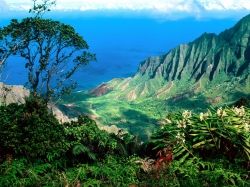 Hawaii. To many, this is a dream vacation spot of beaches and ukuleles, the hula dance, and the best surf around. Hawaii is also home to many of the best and most underrated singers on the planet. Don’t believe me? Here’s a sampling!

Also known as “Bruddah Iz,” Israel Kamakawiwo’ole mixes originals with superb renditions of many songs you might recognize. And he had a wonderful sense of humor! Though he unfortunately passed away in 1997 due to health issues, we can still enjoy his music.

The singing trio Na Leo Pilimehana is made up of three ladies named Angela Morales, Nalani Choi, and Lehua. Their tours have taken them across Hawaii, the mainland United States, and Japan. Their diverse backgrounds include theater, banking and historical research.

Teresa Bright brings a more traditional Hawaiian sound to her music. Her music is popular on an international scale and she has toured in New Zealand, Russia, Fiji and Rarotonga.

Willie K has been described as “a Hawaiian Jimi Hendrix” by Honolulu Weekly and has opened for a diverse group that includes Willie Nelson, Crosby, Stills and Nash, Bonnie Rait, Jimmy Buffet and Mick Fleetwood. He has performed halftime shows for pro football games and appeared on VH-1, performing as part of their “Top 100 Love Songs” show.

Cecilio and Kapono routinely play sold-out concerts and still hold the venue record for largest attendance at the outdoor amphitheater Waikiki Shell (14,000 people). This was topped by shows at Honolulu Stadium, with 22,000+ and then 30,000+ people.

More from Cecilio and Kapono

Ekolu has played at several venues across the United States and Japan, entertaining crowds of 15,000+ people. Hits include “Down in the Valley” and “Just One Night.”
More from Ekolu