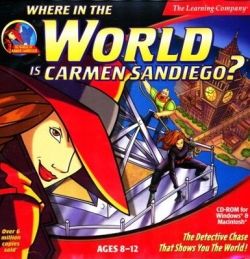 She’s been the subject of books, games, a cartoon, and two game shows and has her own website, Twitter and Facebook page. She’s Carmen Sandiego, a mysterious criminal mastermind who can be anywhere in the world right this minute. She’ll leave behind a series of clues for anyone brave enough to chase her. Your goal is to use your geographical knowledge and track down Carmen Sandiego and her cleverly named henchmen.

A Little About Carmen Sandiego 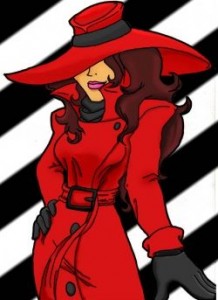 Carmen Sandiego’s crime spree began in 1983, when businessman Gary Carlston whispered in programmer Dane Bigham’s ear about an idea he had for an international criminal mastermind who could help teach children about geography. Bigham whispered in Carman Sandiego’s ear and, by 1985, her underground empire was established enough for her to go public with a series of computer games centered around her criminal adventures. Her empire rapidly expanded to include cartoons and at least two game shows called “Where in the World is Carmen Sandiego” and “Where in Time is Carmen Sandiego?”. With the allies in her V.I.L.E. international crime ring with names like Justin Case and the alien Kneemoi, she challenges junior sleuths around the world to find her. Who will succeed? Maybe you will be the first to bring her to justice.

Where Is Carmen Sandiego Now? 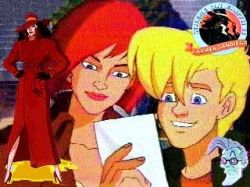 Lately, Carmen Sandiego has gotten rather bored and frustrated. She just hasn’t gotten the attention she had in the 1980s and 1990s and is tempted to go on a new crime spree just to liven things up. That could well mean adapting to new technologies like smart phones, iPads and all the cool gadgets of our wired world. Keep your eyes open and brush off your geography skills, because Carmen Sandiego could pull off a major heist in your town next!